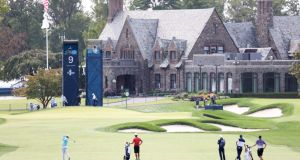 Rory McIlroy plays into the ninth green during practice ahead of the 20202 US Open. Photograph: Jamie Squire/Getty

The delayed 2020 US Open gets underway later on today, with the year’s second Major taking place at the notoriously devilish Winged Foot in Mamaroneck, New York. There are four Irish players in the field - Rory McIlroy (1.07pm start, Irish time), Graeme McDowell (1.18pm), Cork amateur James Sugrue (5.54pm) and Shane Lowry (6.05pm). And the quartet have a stern test awaiting them, writes Philip Reid: “But the challenge of a course, with its fearsome reputation, will ensure mental strength as much as any shot-making will be a crucial element in determining its latest winner.” Meanwhile he has compiled a comprehensive hole-by-hole guide to the West Course at Winged Foot, which is available here. And he has also picked out five players who could be in for a strong week in New York, with Dustin Johnson the current bookies favourite at 17-2. The Irish Times liveblog will be running throughout all four days of the tournament - join us today around 1pm as Malachy Clerkin and then Ruaidhrí Croke take you through the action.

There will be no fans present to witness what could be one of the defining nights in the history of Shamrock Rovers later this evening, as they take on seven-time champions of Europe AC Milan in a one-legged Europa League qualifier in Tallaght (kick-off 7pm, RTÉ2). No Irish side has ever scored a competitive goal against an Italian side in Europe, but the Premier Division leaders will be hoping to catch the Rossoneri cold in what will be the visitors’ first competitive fixture of the season. And yes, Zlatan has travelled. Dundalk are also in Europe League action tonight, as they take on Andorra’s Inter Club d’Escalades at Estadi Comunal with Filippo Giovagnoli looking to make it three wins from three since he replaced Vinny Perth at Oriel Park (kick-off 6.30pm).

1 Covid-19: Seventy cases in Cork traced to local pubs and restaurants in recent weeks
2 Graham Norton: ‘I wanted out, out, out of Ireland’
3 Speed and distance Covid-19 droplets travel tracked by researchers in Mater hospital test
4 Eighteen revelations from a trove of Trump tax records
5 Olivia O’Leary: If you move to Carlow, there are things you’ll have to get used to
6 More than 30 people queue overnight to secure property in Carlow
7 Hello Eir, is anybody there? Four unhappy customers complain
8 The Irish Times view on Donald Trump’s taxes: an overdue lifting of the veil
9 Three Ireland switches on 5G network around the country
10 ‘I never suspected that, aged 29, I’d be lost’
11 Covid-19: Possible extra restrictions for four counties to be decided by weekend
12 Ken Early: Handball ‘crisis’ a timely distraction from the grim bigger picture
13 Susie Dent: ‘Jimmy Carr is incredibly rude to me. I took it as a compliment’
14 Bus Éireann to shut many inter-city routes due to financial pressures
15 Donald Trump's taxes: US president paid $750 federal income tax the year he won the election
16 Nurse who falsified prescriptions is struck off register by High Court
17 Are you a non-lying cheat or just radically dishonest?
18 Am I paying too much for my buy-to-let mortgage?
19 Donald Trump’s Irish and Scottish golf courses ‘reported losses of $63.6m’
20 Gardaí seeking to track movements of man (48) prior to unexplained death
21 Large sections of Garda to be disarmed following review
22 Ex-minister Michael D’Arcy failed to alert ethics group on post
23 There’s something grotesque about council’s plan to destroy historic horse yard for hotel
24 Positive omens for Kenny ahead of Ireland’s Slovakia clash
25 Ireland’s travel green list reduces to four countries
26 Over 10,000 more people on pandemic unemployment payment in past week
27 No joy for consumer with a faulty Husqvana chainsaw
28 Liverpool maintain perfect start with win over Arsenal
29 AfD fires spokesman who favours ‘shooting or gassing’ migrants
30 Dublin Halloween festival cancelled due to Covid-19
31 My cancer scare, the marathon and me
32 High Court approves ECT treatment for elderly priest
33 UCD professor asked to resign from EU committee over Covid-19 claims
34 Mortgage breaks will not be extended beyond this week
35 Shipman's motive may have been 'addiction to killing'
36 TDs and councillors say local Covid restrictions should be considered
37 Almost 100 Leaving Cert students had six or more subject grades lowered
38 City council to investigate Central Bank’s bird scaring device
39 Pilita Clark: The looming legal minefield of working from home
40 Leeds the field – An Irishman’s Diary on the Irish in Leeds
Real news has value SUBSCRIBE