In the sixth instalment of Ulster Bank’s The Story of Home series, Emily Cramp shows us around her third generation Blackrock period property

Emily Cramp’s property is a period home with lots of light, airy rooms and beautiful splashes of colour. 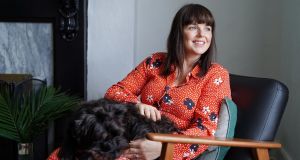 Emily Cramp’s property is a period home with lots of light, airy rooms and beautiful splashes of colour.

Emily Cramp wanted to create the feeling of getting a great big “home hug” when you walked through the door of her home in Blackrock, Co Dublin. She, her husband, and their three-year-old daughter Bibi bought the house from Cramp’s mother two years ago, and she has taken the same care in crafting her home as she does with crafting stories for the brands she works with in her marketing consultancy business, which is also based in the house.

The property is a period home with lots of light, airy rooms and beautiful splashes of colour, vibrant and refreshing greenery and the clever use of mid-century and Scandi touches harmoniously included throughout. This is the kind of home you wish you could box up and keep for your own. Cramp is proud to be the third generation of women to live in the house, located in the heart of Blackrock, and now Bibi will be the fourth.

“The house itself was built around 1840 and my Grandmother moved in after she got married in 1950. She had her family here, three girls, my Mum was the youngest and my Mum grew up here. [We have] extremely happy memories of the house when were kids,” she says.

The couple were working in London living life “at 100 miles an hour” when they discovered that she was expecting their first child. Cramp had worked in a marketing agency in Dublin for years before deciding to take a leap and open the same agency’s London office.

“I was fortunate enough to work on some of the biggest brands in the world over the years, crafting stories and campaigns, and had the opportunity to go to London and set up [the London office] there and ran that for three years. It was an incredibly brilliant opportunity and I had a great time doing it. When I made the decision to move from Dublin to London I had met my now husband and he was living in London so it was a big pull. Also, I was ready for a change,” she said.

However, in 2017, trying to find the right property was proving extremely challenging and the couple made unsuccessful offers on nine different properties. That was when her mother stepped in and asked if they would consider buying the family home and she would then downsize.

“It really was meant to be. We will be forever grateful to my Mum for giving us the chance to do that. It’s a daunting process at any stage I’d say, buying a new home, but for me there was the added responsibility of paying homage to the home that my Mum had grown up in and my granny had lived in as well.”

Cramp said they took their time doing up the house and as it’s a listed building the structure has stayed the same. They used paint, furniture and art to transform it into the gorgeous haven it is today.

“It was a really joyous process. We’d have painted a room and my Mum would arrive in and seeing her reaction was really special. She said to me at one point when we’d managed to get a lot of the rooms done, “You know what, your grandmother would really love this, she’d have loved it,” and that was just incredibly special.”

Cramp said that she got a very different sense of what “home” meant when living abroad, and everything changed with the prospect of motherhood and her own family.

“I found that when I was in London the sense of home really is belonging and your friends and your family. When I discovered I was pregnant, I had a real longing to come home to be around the people I love and the places I loved. I really missed being beside the sea. That was a huge part of our decision and where we’re at now.”

Cramp works on projects or brands “with purpose”. She has created a specific office corner where she can work and switch off from the rest of the house and equally, when her day’s work is done, she can shut the door and leave it there.

“I would describe this home as being the most grounding and lovely place to be in. Home for me is a place that’s happy and secure but also gives you a big hug, a big home hug.”