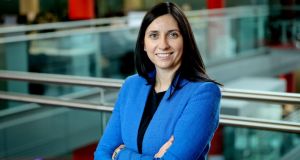 Susan Roche, PwC tax director: “The Government has to contend with the implications of Brexit, US tax reform proposals, the OECD BEPS project, and renewed EU proposals on tax harmonisation and taxation of ‘digital’ business.”

While the main focus of public attention on the recent Budget may have centred around income tax adjustments and spending announcements, the overall tax reform agenda continues apace. Much of the impetus for that agenda comes from outside of Ireland with the OECD, the EU, and the Trump administration in the US all playing significant roles.

“There has been an unprecedented level of focus around tax issues internationally in recent years,” says PwC tax director Susan Roche. “The pace of change has also been quite rapid and this has thrown up a huge amount of issues from a tax policy perspective. The Government has to contend with the implications of Brexit, US tax reform proposals, the OECD BEPS (base erosion and profit shifting) project, and renewed EU proposals on tax harmonisation and taxation of ‘digital’ business.”

Just one of these would give an already busy Department of Finance plenty to think about, but all of them at the same time certainly present a challenge. And then there is the not-so-small matter of the Coffey Report and its recommendations.

Prepared by Seamus Coffey, a senior independent economist from University College Cork, the report is an independent examination of Ireland’s corporate tax regime which was commissioned by the Government in the wake of the Apple tax ruling. Coffey makes a number of recommendations but three of the most interesting are in the areas of transfer pricing, intellectual property (IP), and the geographic basis of our taxation system.

There was good news in the report according to Roche. “The report finds that the current corporate tax system is transparent and appropriate,” she says. “It is also important to note that there are numerous recommendations and it will take some time to implement all of them but most of them are not contentious at this stage.”

The IP capital allowances regime recommendation is the most imminent and action has already been taken on it in the Budget. This saw the reintroduction of the cap of 80 per cent on the amount of profits which can be sheltered with intangible asset capital allowances. This cap applies only in respect of intellectual property acquired on or after midnight on Budget Day (October 10th 2017). According to Roche this will not actually impact on the amount of tax ultimately paid by companies – just its timing – meaning no overall change in effective tax rates for companies but it is a matter of principle as it will ensure that companies have to pay at least some tax each year. There is no change regarding IP acquired before Budget Day.

Another recommendation involves a potential switch from our current worldwide basis of taxation to a territorial one and this will require considerable thought both before and during implementation. “Ireland is one of just eight OECD jurisdictions with a worldwide basis of taxation,” Roche points out. “Under its tax reform proposals, the US has already signalled that it will move to a territorial basis. Taxing companies on their worldwide income is quite complex and a territorial system should be simpler and is generally seen as more competitive.”

This move shouldn’t adversely impact the exchequer as it would be implemented in conjunction with a controlled foreign company regime which should help protect the Irish tax base.

The Minister for Finance announced a 16 week consultation process in relation to these three items during his Budget speech, which gives companies the opportunity to provide their views on future tax changes.

Events in Brussels are driving us in the direction pointed to by the Coffey report in any case, she explains. “For historic reasons Ireland doesn’t currently have a controlled foreign company (CFC) regime, which is an anti-profit shifting measure. We will have to introduce one with effect from January 1st, 2019 under the EU Anti-Tax Avoidance Directive and this could be best done as part of a shift to a territorial system.”

This isn’t Ireland’s only obligation under that directive. Other key elements include interest deduction limitations, exit taxation rules, general anti-abuse rules, and hybrid mismatches. All of these provisions will have to be implemented over time between 2019 and 2024, further adding to the burden on the shoulders of the Department of Finance and Revenue.

The renewed push for a common consolidated corporate tax base (CCCTB) by France, Germany, Spain and Italy doesn’t altogether surprise her. “CCCTB has been around for nearly 14 years in various guises,” she says. “And we are seeing the proposal being revived by that same cohort of member states again. But importantly Ireland is not the only member state which does not favour corporation tax harmonisation and unanimity is required for approval. The Minister has made it very clear that Ireland’s position remains the same when it comes to the requirement for unanimity for any tax changes at EU level. I don’t see CCCTB in its current guise happening in those circumstances.”

The current proposals on a digital tax are almost too vague to be commented on definitively, Roche believes. “The Commission came out with three options – a turnover tax, a withholding tax, and a levy on digital services. Sufficient detail on any of these options is not currently available and even the Commission has acknowledged that there are compatibility issues to be addressed in that it’s not clear whether any of these proposals would be in line with EU law or international trade laws. There is also the whole debate as to whether you can any longer separate the digital world from the rest of business to be considered.”

The final piece of the international jigsaw comes in the form of the US tax reform proposals. “We have been waiting and waiting for more detail,” says Roche. “We had the Trump one-pager earlier in the year, then the report by the ‘Big Six’ – which dropped the border adjustment tax proposal, and the latest one with the interesting title ‘Unified Tax Framework for Fixing our Broken Tax System’. But this latest report was again quite light on detail.”

The sense is that they will want to have something in place by the end of the year to give the US president, Donald Trump, a big legislative win

The headline proposal for a cut in the corporation tax rate to 20 per cent is the one which captured most attention on this side of the Atlantic. But with a local state tax averaging at over 4 per cent applied on top of that, the American corporate tax rate will still be around double Ireland’s 12.5 per cent rate and shouldn’t diminish our tax competitiveness to any significant extent, says Roche.

She believes other measures to address profit shifting and base erosion will be of most interest to FDI firms here but details are still awaited. “The sense is that they will want to have something in place by the end of the year to give the US president, Donald Trump, a big legislative win. Legislation has to be drafted first and we can expect that around November. However, any tax cuts they make still have to be funded and that’s on top of any income tax cuts they might want to make. There is quite a way to go on this yet.”

It is unclear whether or not there is support to get any tax legislation passed before year end. But it is likely that the Trump administration will aim for that timeframe as the November 2018 mid-term elections could potentially change the balance of power in Washington.

These various developments all add up to a busy time ahead for the Department of Finance. “It’s a very challenging task for them to try to figure out everything that’s happening internationally. No one could have predicted that all of these things would come along at the same time. We are going to have an interesting few years ahead.”

PwC has published its annual Worldwide Tax Summaries - Corporate Taxes 2017/18, the latest compilation of worldwide corporate tax rates and rules. Tax systems are evolving in Ireland and around the world and for businesses that means keeping up to date with all elements of tax compliance locally and internationally. The report is of particular use for companies seeking to invest in Ireland but it is also a great resource for Irish based companies who are looking to invest overseas. This is the first year the publication is digital only - accessible as an ebook, via mobile and online at the PwC website. You can access the Irish content directly at the following link: http://pwc.to/2vO1Xbr.