Rugby World Cup 2019: To win, publish a short video to Land Rover’s social media accounts of your child showing why they would make the perfect team mascot 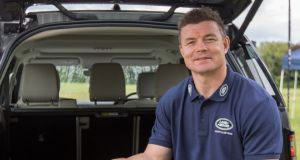 All entries will be reviewed by a panel of judges including Land Rover ambassador Brian O’Driscoll. The closing date for entries is July 31st and the winner will be announced in early August

Do you know a young rugby fan that would like to be the official mascot who walks onto the pitch in Japan at Rugby World Cup 2019? That’s the incredible prize up for grabs in a Land Rover Ireland competition just launched by ex-Ireland international Brian O’Driscoll and Land Rover, a worldwide partner of Rugby World Cup 2019. And the best part is that a parent gets to come along as part of the prize too.

Land Rover Ireland are giving young people aged seven to 13 the chance to win this incredible prize simply by submitting a short video that demonstrates why they would be a great mascot. The young people entering should use their imagination to stand out from the crowd. The video might be a galvanising team talk, words of wisdom to coach the team to a win, or even a rousing rendition of the national anthem – whatever they think it takes to capture the attention of the team.

“This is a once in a lifetime experience from Land Rover Ireland to win the privilege of walking onto the pitch in Rugby World Cup 2019,“ says O’Driscoll. “It’s a phenomenal opportunity for one rugby fan.”

Entries should be submitted to Land Rover’s social media accounts on Instagram (@landrover_ie) and Twitter (@LandRover_IE) and include the hashtags #ireland and #aboveandbeyond .

All entries will be reviewed by a panel of judges including Land Rover ambassador Brian O’Driscoll. Eddie Kavanagh, Jaguar Land Rover Ireland managing director says, “We’re delighted to offer young rugby fans this fantastic opportunity and we’re looking forward to reviewing the entries from across the country. Land Rover is a supporter of rugby from grassroots to international level and it’s fantastic to be able to offer a young rugby fan this once in a lifetime experience at Rugby World Cup 2019.”

The closing date for entries is July 31st and the winner will be announced in early August. For competition details, terms and conditions and further information log on to landrover.ie/rugby or call into your nearest Land Rover dealership.

Land Rover has been at the heart of rugby for over two decades, from grassroots to the pinnacle of the sport. Rugby partnerships around the world include top-flight properties in France, Australia, South Africa and England, Rugby World Cup 2015 and Rugby World Cup 2019.