Blackrock: at home in one of Dublin’s best-connected neighbourhoods

Blackrock is defined by its generations of homeowners. Proby Place offers a great opportunity for a new generation to establish their identity within this great city neighbourhood 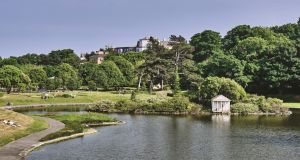 This latest development from Glenveagh Homes fits right at the core of Blackrock’s premium property offering.

“Born in Blackrock, stay in Blackrock” is an adage frequently used by locals about the suburb they were born and raised in. But many have had to leave over the years, with a shortage of housing stock often at the heart of that decision. Properties suitable for young or growing families don’t often come to market in the Dublin enclave and new builds are very rare indeed.

That’s why Glenveagh’s Proby Place, which is nearing completion and is just a short walk from Blackrock Village, is attracting so much attention. Parents of children living abroad, or those that have had an eye on the old neighbourhood for several years, see a great opportunity to return home.

The neighbourhood of Blackrock provides an evolving property ecosystem that’s better than many other Dublin neighbourhoods in the choice of homes available. For over a hundred years it has been considered one of the capital’s most sought after addresses. Proby Place, the latest development from Glenveagh Homes fits right at the core of Blackrock’s premium property offering, appealing to many buyer types.

Lord William Allen Proby was a resident of Blackrock from 1746, where he built his home Grey House, and it’s he that Proby Place, a small horseshoe shaped development of only 20 houses, is named after. This is a new home scheme in an area where there aren’t that many new builds and its high specification finish and A-grade BER rating, as well as its proximity to several sought-after schools and the sea is making it particularly attractive to growing families.

Numerous schools, speciality shops and high-end restaurants form part of the Blackrock community, as well as an abundance of green space in the form of several parks.

In fact each house type at Proby Place is named after one of the many parks in the Blackrock area; The Carysfort, The Rockfield, The Avoca, The Blackrock, The Deerpark and The Carraig. The original grounds of Grey House featured walled orchards, tree-lined walkways and an ornamental lake, and these gardens now form part of Carysfort Park, which is right on Proby’s doorstep.

Refurbishments at the two major shopping centres, Frascati and Blackrock are nearing completion, and Cornelscourt and Stillorgan shopping centres are a short drive away. Blackrock Bowling and Tennis Club, Carraig Tennis Club, Elmpark Golf Club, Blackrock Football Club and Monkstown Tennis Club make up just a handful of the many sporting clubs that have a long standing place in the community.

Khan Boutique, Heron and Grey restaurant (which has just retained its Michelin Star), and Bear café are all speckled throughout the village and in nearby Monkstown, where many Blackrock residents decamp to for Saturday or Sunday brunch, there is Salt café at Avoca, FX Buckley Steakhouse, That’s Amore, Lobstar and Bresson.

There are a number of sought after primary and secondary school options in Proby Place’s catchment including Blackrock College, St Andrews College, Carysfort National School and Sion Hill. Blackrock College was founded by the Holy Ghost Fathers in 1860, and has for over a hundred years been an integral part of the community. St Andrew’s College takes in over 1,000 pupils from Ireland and is very multicultural, enrolling children from 40 other countries.

The schools in the area are an integral part of the Blackrock landscape, knitting together generations of people in a community that thrives on family.

Proby Place is 9km from Dublin City centre and there are numerous transport options on the doorstep, making it one of the most well-connected communities in the city. Blackrock Dart station is 10 minutes by foot and several bus routes pass along the Rock Road and Stillorgan dual carriageway that connect directly with the city centre. Dalkey village is also just 15 minutes by train.

The six house types in the development make up a selection of four and five-bed, A-rated properties with generous proportions; houses range in size from 1,910sq ft to 2,950sq ft.

From the outside, houses in Proby Place look tall and imposing, built over three floors, but it’s inside, where the expansive layout is catching potential buyer’s attention. There is a continuous sense of space and light throughout, and a lot of time was spent shaping the architecture to allow for the large courtyard and continuous window details. The space has been used very effectively, allowing ample room for growing families.

The developers have spared little on interiors, with solid walls and floors, levelled and seeded gardens and there is a high-end finish throughout.

Bathrooms are finished with Villeroy and Boch sanitary ware and porcelain tiles are used in all wet areas and bathroom floors.

Wardrobes come with shaker-style doors and washed oak veneer carcasses are supplied by Gallagher kitchens and these houses contain not one but two walk-in wardrobes.

In the show house, a fifth bedroom has been presented as a cinema room, something many purchasers are likely to take inspiration from in their own homes.

This was an ingenious move on the part of Glenveagh; there is not one person young or old that could not see the potential of a Six Nations party in this house in 2019.

For more on Proby Place and to arrange a viewing, visit probyplace.ie