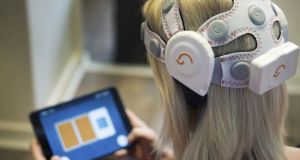 BrainWaveBank focuses on creating technology that allows anyone to measure and track their cognitive health at home.

Ireland is a comfortable home for many of the big players in the global life sciences sector with 18 of the 20 top pharmaceutical companies in the world already based here, according to Enterprise Ireland.

The Irish life sciences sector exports more than €45 billion each year, and employs more than 50,000 people. Enterprise Ireland is keen to encourage the continuing growth of the industry through the funding and development of start-ups.

Based in Dublin, HealthBeacon is a start-up that develops smart-technology solutions for managing medication at home. Designed for patients who self-inject, HealthBeacon functions as a sharps bin that improves compliance and outcomes by reminding users when to take their medication. It also opens the door to a more connected form of medicine, with the potential to communicate data and test results directly to the relevant clinics.

Earlier in the year, HealthBeacon received FDA approval, granting access to the American market. As well as expanding its work in Dublin, the company have also opened offices in Montreal and Boston.

As a start-up based in Galway, EnteraSense is focused on developing medical devices that can diagnose and monitor internal bleeding. The company, which started in 2015, aims to provide an alternative to endoscopy to detect bleeds, which comes in the form of a small capsule that can be ingested by the patient.

The capsule contains an optical-based sensor to detect bleeding in the upper gastrointestinal tract. This sensor acquires data from the environment, which is processed by an algorithm to determine if blood is present. The data is transmitted back wirelessly, allowing a diagnosis to happen in real time.

This technology can potentially reduce hospital costs, increase the speed at which patients are screened and treated, and allow doctors to more effectively prioritise patients.

BrainWaveBank focuses on creating technology that allows anyone to measure and track their cognitive health at home. The Belfast start-up employs a mix of 20 engineers, scientists, and psychologists, who have developed a wireless EEG headset that allows cognitive testing to take place outside a lab environment.

Wearing the headset for 15 minutes each day while playing some mobile games allows BrainWaveBank to assess cognitive functions that are indicative of brain health. The accumulated results can provide insights on how lifestyle factors including sleep, diet, and medication affects short- and long-term performance.

Winners of the Life Sciences and Healthcare category at the Irish Times Innovation Awards 2018, BrainWaveBank’s technology has the potential to shed light on the development and possible treatment of a range of cognitive health conditions.

Dublin-based biotech company Nuritas is leading the way in the therapeutic use of bioactive peptides. Nuritas has received backing from several high-profile investors including U2’s Bono and The Edge, as well as early Facebook and Dropbox investors like Ali Partovi, and Salesforce chief executive Marc Benioff. Last month, the company received a €30 million investment package from the European Investment Bank.

Founded in 2014 by mathematician and bioinformatician Dr Nora Khaldi, Nuritas is a discovery platform for active peptides that can prevent or treat disease with industry-leading speed and accuracy. The company is changing the landscape of drug discovery by identifying novel peptides using a proprietary artificial intelligence platform. Nuritas engages in collaborative partnerships in the pharmaceutical and consumer goods industries to conduct peptide discovery that is faster, more accurate and less expensive than traditional drug discovery.

The technology has potential use in pharmaceuticals, dermatology and personal care, and plant and animal health.