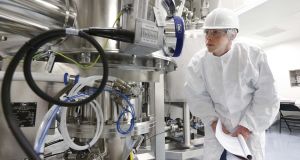 Ireland is also one of the largest exporters of medical products in Europe with annual sales of €12.6 billion to more than 100 companies worldwide

Ireland’s life sciences sector is broadly based and has developed considerable strengths over the past five decades and more. Indeed, it is among the most stable sectors in the economy with a record of near continuous growth throughout its history. “It is a very stable industry,” says Matt Moran, director of Biopharmachem Ireland, the industry association for the sector. “We have seen very little attrition and even when a company does go another tends to move in to replace it.”

The standout area of the biopharma industry in recent years has been biologics. “We have seen €10 billion in capital expenditure in the industry since the turn of the century, most of it into biotech,” Moran adds. “BMS just finishing out a large plant in Blanchardstown. Alexion’s biologics plant is next door and Mallinckrodt is also in Blanchardstown. A new biotech cluster is developing there.”

This is not too far away from the Pfizer biopharma plant at Grange Castle. “This is one of the largest biopharma plants in the world,” Moran points out. “Then you have Eli Lily down in Kinsale, Janssen Pharmaceuticals in Ringaskiddy, Allergan in Westport, and MSD in Brinny and Carlow. There is a lot happening and most of it is at the biologics end.”

The success in this area did not come about by chance. “We were promoting Ireland as a location for this emerging industry as far back as the mid-1990s,” Moran explains. “The government along with organisations such as IDA, SFI and NIBRT have also done a lot of good work in developing skills and promoting Ireland as a base for this time of industry. Ireland is now second only to the US for this sector and is seen as at the cutting edge and very advanced end of industry. This is very much the area to be in.”

KPMG partner Sean O’Keefe agrees that this is a particular area of strength. “BMS, Pfizer and Eli Lily have all developed large biologics facilities to manufacture the next wave of large molecule pharmaceutical products here,” he notes. “We’ve also been very good at attracting the new players in this area with Alexion and Regeneron and others making significant investments here.”

Another strength is the medical technology sector and Ireland is now recognised as one of just five global hubs for the industry. The sector, which includes 18 of the world’s 25 firms, employs over 29,000 people in Ireland and is the second largest employer of medtech professionals in Europe. Ireland is also one of the largest exporters of medical products in Europe with annual sales of €12.6 billion to more than 100 companies worldwide.

A number of major investments seen in Ireland in recent years have centred on drug delivery devices. Companies such as Teva, Mylan and Amneal have invested in development and manufacturing of respiratory drug delivery devices and Irish company Aerogen is developing world-leading technology in drug nebulisation.

This is a zone of opportunity for Ireland according to James Cassidy of Life Science Recruitment. “Combination devices which bring pharmaceuticals and medtech together are becoming an emerging sector,” he says. “Ireland has strengths in those areas such as skills in IT, life sciences, big data and so on. There is a major opportunity for Ireland to do very well there.”

The research sector is another strength, says Science Foundation Ireland strategy director Ruth Freeman. “There are a number of things going on which are very interesting. When people think about life sciences in Ireland they tend to visualise traditional pharmaceutical companies making medicines. The SFI funded Synthesis and Solid State Pharmaceutical Centre works with 20 industry partners on how to make medicines more efficiently – everything from molecular synthesis to delivery mechanisms. It’s about making drugs that patients can absorb and tolerate and this will remain important for a long time. Also, the Insight centre is looking at big data for connected health and other applications.”

These strengths must be protected, according to Arthur Cox head of life sciences, Colin Kavanagh. “Despite uncertainty in some key trading partners, Ireland continues to see strong levels of FDI investment across the sector. However, we must not be complacent. It is important that the government does not lose sight of the fact that it is not just about attracting investment but also ensuring that there are viable markets for the products being manufactured here.”