Christmas shows and classic movies for all the family

Festive shows this season include Cinderella, Jack and the Beanstalk, Oliver! and Elf 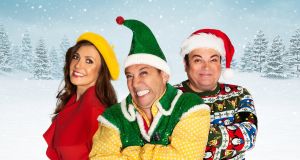 Get the family out and about this Christmas and make the most of the fantastic entertainment on offer.

The festive season wouldn’t be the same without a trip to the panto, and this year there are some Christmas crackers to choose from. For a laugh-a-minute marathon don’t miss Cinderella: The Story of Cinders and Her Fella at Dublin’s Olympia Theatre. It’s a fun-filled retelling of the childhood favourite, with a smashing cast of characters including Fair City’s Ryan Andrews as Olly, and his TV soap co-star Maclean Burke as Dame Polly.

It’s a sure-fire showstopper directed by actor Simon Delaney, who is happily breaking the old WC Fields adage – in spades – by working with a cast of more than 100 all-singing, all-dancing children. It runs from Friday December 20th to Saturday January 4th.

Cork has a top-notch panto to enjoy this year with a madcap Jack and the Beanstalk taking over the Everyman Theatre. This one has been packing them in since the end of November, which is no surprise, as it stars the same zany gang that sold out the venue last year.

This time around the full-of-beans troupe features actor and musician Jimmy Brockie as Jack Dawe, Cork actor Michael Sands as Professor Saxophen, and Fionuala Linehan as Jack’s poor beleaguered mother. Panto veteran Ciarán Bermingham has the plum role of Charlotte Cowhee, whose special gift is to say out loud what people think privately – not unlike your kids.

Bringing together all the best elements of a classic panto, it’s got favourite songs to sing along to, dance routines to have you bopping in your seat, and slapstick capers to keep the kids cheering and booing with gusto.

Jack and the Beanstalk runs at the Everyman Theatre until Sunday January 12th, with a sign language-interpreted performance on Friday January 3rd.

For very many families, Christmas isn’t Christmas without a viewing of Elf, the comedy movie starring Will Ferrell. This year you can all get a huge step closer to the action at Elf – A Christmas Spectacular at Dublin’s 3Arena. It stars former Hear’Say popstress and Coronation Street star Kym Marsh and Shaun Williamson, forever known as “Barry in Eastenders”.

Elf will already be known to many as the hit West End and Broadway musical based on the Hollywood blockbuster movie, but here it gets supersized into a festive extravaganza, with Christmas bells on.

Marsh takes the role of Buddy the Elf’s girlfriend Jovie, while Williamson plays Buddy’s dad, Walter Hobbs. The title role goes to seasoned comedy actor Tam Ryan, who you’ll recognise from a plethora of TV shows, including Emmerdale. He also earned his chops in panto so knows how to tickle a rib or two, and first stepped into Will Ferrell’s turned-up shoes to play Buddy the Elf last year, to wide acclaim.

The Christmas Spectacular production features a book written by Bob Martin and Thomas Meehan – who have previously worked on Annie, The Producers and Hairspray – and features an original score of great songs. Fact fans might also like to know that this year’s show reunites Marsh and Williamson on stage: the pair starred together, in 2006, in the hit West End musical Saturday Night Fever.

Santa puts in an appearance too, and has at least one of his scenes stolen by Marsh’s eight–year-old daughter Polly, who makes her stage debut playing a naughty child.

There’s a cast of 70 and the show’s original staging is enhanced with giant screens, showing both computer graphic backdrops and live action close-ups. The 5,000 seat arena layout has a 70ft wide stage and a 60ft long thrust stage, with some scenes taking place around and above the audience. But there are just three shows to catch – 3pm and 7pm on December 28th, and 1pm the next day – so act fast.

You can get out of the house, and consider yourself at home, in one swell swoop at the National Concert Hall in Dublin, where everyone’s favourite, Oliver! takes up residence. Brought to you by the same team that previously staged such showstoppers as The Wizard of Oz, Annie and The Sound of Music, this is an all-singing, all-dancing version of a much-loved classic.

The wonderful Tony Finnegan returns to the NCH stage as Fagin, with musical theatre star Róisín Sullivan as Nancy and a full cast of more than 100 singers, dancers and street urchins, so expect that roof to be raised.

And it’s clear/ we’re/ going to get along . . . to the show because tickets are selling out fast. There are only 11 performances being staged, from December 27th to January 3rd, so put some oom-pah-pah into it and book those tickets now.

Christmas wouldn’t be Christmas without festive movies, and Access Cinema means some festive classics are coming to a venue near you. The organisation’s mission is to provide audiences throughout Ireland with access to the best of Irish, world and independent cinema. It does this via a network of not-for-profit and voluntary organisations, including arts centres nationwide.

Its December programme has Christmas favourites such as Scrooge, It’s a Wonderful Life and Pavarotti. Elf is playing on various dates in Blanchardstown, Portlaoise and Kilkenny. There’s a Frozen sing-along in the Source Arts Centre in Thurles, and The Greatest Showman sing-alongs in Portlaoise and Newbridge, while The Grinch puts in appearances in arts centres in Tinahely and Bray. See accesscinema.ie for more.