Party planners back in full swing

As the economy improves, it’s boomtime for event organisers 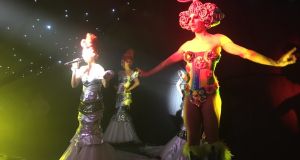 Fortunately for event management professionals, the good times are rolling and there is an appetite for partying again.

It’s not just builders who are back in business – the party planners are back in town too. The tide has turned from tight-fisted austerity to controlled extravagance as companies reward workers with corporate bashes, mystery tours and team-building gamer weekends. As purse strings loosen, many families are engaging professional planners to celebrate significant birthdays too.

Caroline Gardiner is the energetic and creative force behind The Party Professionals. She masterminds celebrations from special christenings to creative business events, looking after all the details from location, focal theme, food catering, wine, waiters and barmen. All the hard work and planning is effectively removed from her clients while she tracks down sensational chefs, delectable cocktails, talented entertainers and elegant tableware. Whether you want a massive marquee with a glamorous wow factor, or an indoor party filled with balloons and music, she will pull out all the stops to make it a night to remember.

Why are private party planners and corporate event managers in big demand once again?

“Our planning service is growing for a number of reasons,” says Gardiner. “In most cases, people who use our services do so because they lack the time and experience to pull the event together on their own. Furthermore, and most importantly, they want to be present for their guests on the day of their event and not end up worrying if a caterer or entertainer are going to arrive. Also, the economy has lifted, and that sense of frugality is disappearing.”

We all know the fear factor of running your own show. The in-house bar runs dry, the wind threatens to blow away your makeshift tent and the toilet gets blocked with a queue of guests outside. All these nightmares can happen if you are not equipped with a trusted professional.

“Putting your trust in a reputable planner allows the hosts to fully enjoy the experience and ensure that the set budget is not exceeded,” Gardiner says. “This coupled with good advice, stronger negotiating power with suppliers and a team dedicated to making everything run smoothly is the main reason that people come to us.”

So, what extravagant bashes have Party Professionals organised?

“In late 2018 we were asked to put together a ‘Priscilla Queen of The Desert’ themed party for a private client. This entailed organising a fully lined black marquee with event furniture and a full lighting show. As the client wanted a large stage production, we flew in the cast of Priscilla Queen of The Desert from the West End show in London. On arrival, the guests dressed in elaborate costumes were treated to an Aperol Spritz reception served by buff waiters in the garden. Anyone who has seen the movie will recall the large pink stage bus, which we recreated for the party. After the drinks reception, we surprised the guests by revealing a secretly erected marquee in the Wicklow Valley and the London performers came on stage after a feast of roasted chicken with all the trimmings. The atmosphere was electric from the moment the guests arrived.”

As well as extravagant ideas, there are simple parties like vintage afternoon tea parties. “For our last vintage party, we dressed the waiting staff in historic costumes to add to the authenticity of the theme because for us, the devil is in the detail. Traditionally, Champagne or popular Prosecco is served throughout the event. We also do Oktoberfest parties for our beer-loving clients. We pull together various musicians to create a German band as well as bartenders who pull lots of pints. Currently, we have two boutique festival garden parties on the map and a burlesque circus party in the summer.

Generally, our corporate clients want interactive entertainment to get people involved and create a congenial atmosphere

“Generally, our corporate clients want interactive entertainment to get people involved and create a congenial atmosphere. A casino event is a fun idea as it brings out the competitiveness in people and immediately breaks the ice.

“For international companies, we can put together traditional Irish ceilis. They are not only fun but also educational as many foreign visitors to Ireland don’t know about this Irish tradition. Go Fund Me had a great Irish ceili evening with lots of cultural craic.”

“Last year, we delivered over 420 events countrywide that covered a range of themes,” says O’Connor.

“We work across industry sectors to include both domestic and international customers including clients like Energia, SMBC Aviation, Google, PwC among many others.”

Having survived the recession, they are now achieving revenues twice that at the height of the boom.

“We are a mobile event company, so we deliver our events nationwide from top hotels around the country and organise entertainment on site. Some of the venues we work with include Palmerstown Estate, Powerscourt Hotel, Druids Glen, The K Club, Johnstown Estate plus many more.”

Techies4TempleStreet is one of its bespoke annual events which has raised €750,000 to date for Temple Street Hospital. They hope to hit the €1 million figure this year.

“Kia Ireland came to us looking for a unique way to launch the new Kia Ceed to their dealer network in Ireland,” says O’Connor. “Our solution was a custom-made GPS-based gaming challenge using the cars. We gamified the whole experience using our event technology to make this fun and interactive for the dealers. The morning launch took place at Portmarnock Hotel – from there we designed a route through north Co Dublin. The dealers were split into teams, armed with iPads and they navigated the route, unlocking interactive challenges along the way.

“SQS Ireland did a global rebrand this year. We helped them deliver an evening event to celebrate the launch. We booked the Mansion House and transformed the room with branded engagement stands likes F1 simulator, a virtual reality booth and a DJ to help entertain the guests. The entertainment acts included LED drummers and a performance from an Irish dance group.

“Last summer, we created a bespoke team event for an aviation company at Druids Glen. The group of 200 people were split into teams and they competed in a round-robin format through different zones on the grounds of the hotel. The activities included drone racing, rocket building and several other team challenges.

“Once the activities were complete, the venue became a world food village representing each region’s cuisine, culture. The most unusual requests come from international incentive business. We have organised fun escape games like prison breakouts from Kilmainham Gaol as well as picnics at the top of the Sugar Loaf mountain. They are great for team-building.”

Dave McFarlane runs 360 Entertainment with his business partner Robbie Harris. This company has strong musical contacts and concentrates on providing striking stage acts and band entertainment for event organisers and their own clients too.

Recently, they organised a major event in Dublin for a big multinational sales company.

“This particular client wanted something special to celebrate all their achievements in 2018 and a motivational concert that would inspire the team to look forward to the challenges ahead. As with many multinationals, this is a very diverse company, so we highlighted their cultural range with a fabulous party in the Convention Centre. We sourced the national flags of all the 50 companies represented by the staff, who carried flag-waving poles from all their native countries on board. On stage, there was a colourful dance act that performed a fantastic show,” says McFarlane.

“This was followed by drumming workshops in the afternoon for up to 500 people per session. Dancing always provides a popular spectacle and there is often a request for Riverdance-style acts if we are showcasing Ireland to international businesses. For this event, we finished off the evening with the contemporary Irish dancers Slide Step taking to the stage.

“We also helped launch UEFA 2020 at the Mansion House with countries from all around the world,” he adds.

They had a fantastic idea for customer service software company Zendesk’s office opening by organising hundreds of bodhrans to be made for all the staff along with a rousing trad band to celebrate. They taught the staff to play Together so when the Taoiseach Leo Varadkar walked in he was welcomed by the hypnotic beat of more than 300 freshly trained drummers. The event ended with a surprise hard heel dancer on a table and a stage show from a funky dance troupe.

They also have an Irish trad band called The Liffey, who are proving to be very popular and another act called Jiggy.

At a recent party in the Guinness Hopstore, 360 worked alongside Verve and suspended three remarkable aerialists from the ceiling and they came flying through the air while playing LED drums accompanied by a 10-piece brass band.

McFarlane and Harris are optimistic about the future. “There has been a visible lift in the economy and people are less inhibited about celebrating and spending money. A few years back it was deemed insensitive to be splashing out,” adds McFarlane.

But the times are a-changing and fortunately for event management professionals, the good times are rolling and there is an appetite for partying again.