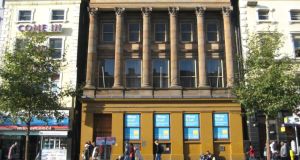 The former National Irish Bank near the GPO in Dublin’s O’Connell Street, is expected to be converted into retail use when its sale is completed shortly.

An investment group has agreed to pay close to the asking price of €1 million for the highly distinctive four-storey over basement building which was converted for bank use in the 1950s.

There are two single storey extensions to the rear along with a small yard accessed from Parnell Place.

The building was designed by Scottish architect David Bryce and completed in 1863.

The pediment is supported by six fluted Corinthian columns and has a carving of The Ten Virgins by John Steell.

Branch sales
The bank branch was one of 26 which ceased trading last November when owners Danske Bank decided to close its retail banking operation in Ireland.

Stephen McCarthy of agent Savills has since sold 12 of 14 branches owned by the bank.

These included the Kilkenny branch which made considerably more than the guide price of €650,000.

The Galway branch at Eyre Square also fetched more than the €720,000 guide while the buildings in Letterkenny and Carrick-on-Shannon easily exceeded the €220,000 quoting prices.

Several more sales are currently under way while little progress has been made on offloading the branches in Mullingar and Finglas.

1 Six weeks of Level 5: Non-essential shops to close, no visitors to homes and a 5km travel limit
2 Life under Level 5: What will the next six weeks look like for the State?
3 Much of what we think about Covid-19 is wrong. We need to change the conversation
4 Don’t panic-buy! Don’t panic-buy! How to spend your last hours before lockdown
5 Covid-19: State moves to Level 5 for six weeks with hopes of ‘meaningful’ Christmas celebrations
6 Fintan O'Toole: State bumbling along with ad hoc decision-making as Covid crisis worsens
7 Coronavirus: Why Level 3 failed and why Level 5 might too
8 With dramatic Level 5 U-turn, Government weakens its own authority
9 Union ‘cannot be convinced’ children will safely return to school after mid-term
10 Suzanne Lynch’s US Election Diary: Trump suffers debate blow amid trailing polls
Real news has value SUBSCRIBE