Patsy McGarry has been Religious Affairs Correspondent of The Irish Times since 1997 and has been with the newspaper since 1994. Prior to that he reported for Magill magazine, the Irish Press, the Irish Independent, and Sunday Independent. He was awarded a national journalism award for political comment and analysis in 1993 and the European religion writer of the year award in 1998. Author of three books, the most recent a biography of former President Mary McAleese, published in 2008, he edited a collection of essays on Christianity, published in 2001. He frequently appears on local radio as well as national radio and TV.

‘We didn’t know L’Arche founder had a darker side’

‘You can’t say stuff, because it’s racism, but it will generally be males of a Muslim persuasion’

Who was L’Arche founder Jean Vanier?

L’Arche, which helps people with intellectual disabilities, has four communities in Ireland

New Church of Ireland bishop of Connor is elected

A Jesuit who left the Catholic priesthood to marry, he was then drawn to Orthodoxy

Elements of the health service are ‘scandalous’, says Archbishop of Dublin

Shaking of hands, taking of Communion on tongue and visiting sick not recommended

President donates 700 books from his personal collection to libraries

President Higgins calls for positivity in efforts to form government

Mary McAleese says ‘safe, affordable’ home should be a right for everyone

In a Word: Rejoice

Institution investigated by Ryan Commission should be memorial – priest

Public policy, gender roles in work and care and sharing of responsibilities to be debated

‘It is important that global issues feature in the election debate’, says agency

‘Questions over whether he is completely in charge of his faculties’

Papal duty: Benedict XVI intervention raises question of what to do with a retired pope

US preacher was due to speak in UCD and Blackrock College

Inquiry report into mother and baby homes may be delayed

Archbishop calls for alliance to combat ‘the right’

Increasingly hatred, racism, and a creeping anti–Semitism, are part of this world

Priest says most Christmas hymns a load of ‘holy smoke’

In a Word: Wish

Like many of the things most real to us, wishes have never been seen by anybody

Legislative changes will vest all future legal rights and responsibilities for information and trace services solely in State agen(...)

Not meaning to crib but . . . timing of most nativity scenes is off

Lemass was taoiseach, everything was changing, when we moved to Ballaghaderreen

Renewed appeal made for recovery of head of Archbishop statue

Words ‘refugee’ and ‘asylum seeker’ should only arouse concern – Archbishop

Racism is nasty in its effects on men and women who need help, care, and respect

Government caught between contesting passions over retention of abuse files

Trend of decline reversed as claims rose by six to 20 in 2017, Dublin Archdiocese says

Number of children who went through institutions investigated by Ryan Commission is about a quarter of 170,000 previously cited

Mary McAleese: Irish people have ‘no right’ to be racist

Head of Anglicans hopes conservative wing will not spur schism

Drumcliffe clergy told musician ‘one of the kindest . . . faithful servants of the church’

Sexuality and spirituality are the ‘same pure water’ – Catholic priest

Archbishop of Dublin’s criticisms of Maynooth ‘hard to hear’

Lay Catholics could soon be officiating at baptisms, weddings and funerals

In a Word: Airport

Mary McAleese: Brexit has produced an ‘enraged, not engaged society’

Gay Byrne was a loyal, if questioning Catholic all his life

Dublin church funeral fees to rise by 23% from January

Irish gay Catholic priest to be honoured by President Higgins

It was 2001, Desmond Connell was about to get the red hat, and we Irish media were locked out

Writing memoir ‘up there’ with Phil Coulter’s ‘many professional challenges’

5:21 Mary Lou - 'Nothing will change if Fine Gael and Fianna Fáil are in government together' 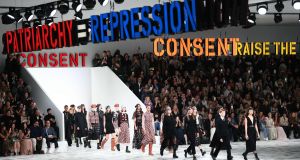