Wolfgang Schäuble’s vision for Europe will not be missed

Outgoing German finance minister misunderstood the cause of the Eurozone crisis 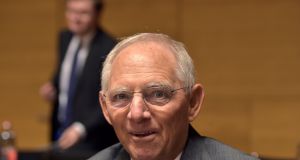 German Minister of Finance Wolfgang Schauble looks on at the start of a European Union finance ministers' meeting in Luxembourg, October 10, 2017. REUTERS/Eric Vidal

It takes something to make the International Monetary Fund look like a cuddly, soft-hearted old teddy bear of a crisis lender, but Wolfgang Schäuble has managed it. The German finance minister since 2009, who more than anyone else embodies the intellectual approach of the eurozone countries to its sovereign debt crisis, is leaving to be speaker of the German Bundestag.

It is quite remarkable that someone so dedicated to the European idea should have dealt the project so much damage. But through a wrong-headed analysis of the situation he has caused unnecessary suffering for crisis-hit countries and threatened the credibility of the single-currency project.

There is now, at least, some recognition that the governance of the euro is inadequate and more power needs to be drawn into the centre. But even here, the model of integration that he and Germany are pushing is based on a faulty analysis of what went wrong.

As the official bailouts for crisis-hit countries started in 2010, Mr Schäuble insisted on regarding all such problems as primarily caused by chronic fiscal incontinence rather than, as for example in Ireland, the aftermath of lending booms gone wrong. For Greece, the eurogroup insisted on imposing seriously unrealistic and self-defeating public deficit targets as a condition of aid. This was the delusion at which IMF, the eurozone’s bailout partner, partially and belatedly balked.

Moreover, although it was not his remit and runs counter to the alleged German tradition of respecting central bank independence, Mr Schäuble also persistently and publicly criticised the European Central Bank.

In particular, he took aim at the policies that did more than anything to return other crisis-hit countries to growth: the ECB’s eventual conversion to the cause of monetary activism, first by capping sovereign bond yields and then by flooding economies with liquidity through quantitative easing.

Accordingly, as Mr Schäuble departs, his vision for the single currency’s future, apart from the ECB abandoning the tools that stopped the crisis, is for the eurozone’s rescue facility, the European Stability Mechanism, to evolve into a permanent European Monetary Fund. Eventually, this may come to exclude the actual IMF from future rescues and hence make sure that all glimmers of common sense that might creep into crisis management are irrevocably blacked out. Mr Schäuble says he supports a banking union, and yet opposes a backstop that might make it safer, and continues to criticise the creation of any meaningful central fiscal authority.

In short, Mr Schäuble’s idea of an integrated eurozone involve replicating all the mistakes of the sovereign debt-banking crisis, with a new institution or two to enforce misguided unilateral adjustment on troubled member states from the centre. As spectacular failures to learn from history go, this one is a corker.

No one doubts the sincerity of Mr Schäuble’s belief that he has all of Europe’s interests at heart. But his career is testament to the ability of some ideas to persist in defiance of tottering piles of evidence that they are mistaken.

Alan Beattie is aleader writer with the Financial Times