October 16th, 2018: Dozens of people take part in a demonstration outside the Dáil calling for action on climate change. Video: Kathleen Harris 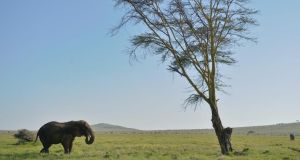 Human history is littered with tales of once-mighty empires and civilisations that crumbled into the dust. While the causes of such collapses are many, ecological overreach and resource exhaustion almost invariably are contributory factors, and societies on the brink of disaster seldom appear to see it coming.

When, for instance, the Mayan civilisation in Central America fell apart in the ninth century, the survivors at least had space to move elsewhere and start again. At that time the world’s population totalled about 400 million. The figure today is almost 20 times larger. Some three-quarters of the Earth’s land surface is dominated by humans and our domestic animals and agricultural systems.

In just the last 50 years, human numbers have more than doubled, the global economy has grown by a factor of four and most indicators of human progress, such as life expectancy, education and access to healthcare have improved. This is known as the “paradox of progress”.

The persecution of our few remaining species of wild animals, from badgers and foxes to hares, is considered an unofficial national sport

Our success has been at a fearsome cost to the millions of other species with whom we share the planet. In what amounts to a global zero-sum game, virtually all humanity’s gains have been as a result of the ransacking of the natural world.

Just how devastating our progress has been was laid bare with the publication by the World Wildlife Fund (WWF) of its 2018 Living Planet Report. The authors pinpointed “exploding human consumption” as the driving force behind the accelerating collapse of nature and biodiversity.

Sharply increased demand for energy, land and water have devastated natural systems. The WWF study measures global biodiversity by tracking population abundance across thousands of vertebrate species. These have shown a stunning overall 60 per cent collapse in numbers since 1970. The tropics have seen the worst devastation, with an 89 per cent crash in vertebrate numbers recorded in South and Central America.

Marine life has been similarly impacted. Freshwater fish species, for instance, globally have tumbled 83 per cent in numbers since 1970, while pollution, gross overfishing and acidification are unravelling the web of life in the world’s oceans.

Astonishingly, of all the mammals on Earth, 96 per cent are humans or livestock, while all wild animals now account for just 4 per cent. Today, seven in 10 of the world’s entire bird population are chickens and other poultry.

Other recent studies have confirmed that the situation is equally dire for non-vertebrates. German research found that 76 per cent of flying insects had disappeared in just the last 25 years. Chief among the culprits is intensive agriculture; copious amounts of cheap food are delivered at the price of a toxic cloud of pesticides, fungicides, herbicides and artificial fertilisers that have rendered entire natural landscapes functionally dead.

Meanwhile, carbon dioxide and other greenhouse gases which are the by-products of our epic surge in economic activity and profligate energy usage, are dangerously altering the chemical balance of the atmosphere and oceans, with global CO2 levels now at their highest level in some 15 million years.

The situation in Ireland, despite our clever “green” marketing slogans, is little better. More than 90 per cent of our “protected” habitats are, according to the 2017 National Biodiversity Forum, in poor condition, while a third of our wild bee populations are in danger of extinction. The persecution of our few remaining species of wild animals, from badgers and foxes to hares, is considered an unofficial national sport.

On the same day the WWF report was published, Minister of State for Natural Resources Seán Canney reaffirmed Ireland’s support for offshore oil and gas exploration. On Canney’s own website, he states his vision for Ireland as “a place where our children and grandchildren can build a decent life for themselves”.

This profound disconnect between politics and reality is widespread. The Government’s own chief scientific adviser, along with assorted department heads, trooped into the joint Oireachtas Committee on Climate Action day after day to justify and rationalise the business-as-usual policies, from airport expansion to fossil fuel exploration, that have led us to the edge of the abyss.

The same short-termism and wilful ignorance of our absolute dependence on the natural world for our survival pervades both public and private sectors and bedevils politics. We now have an ever-narrowing window within which to reshape human societies to live within our ecological means, without annihilating nature in the process.

Celebrated Harvard naturalist Prof EO Wilson boldly proposed that half of planet Earth be set aside as a human-free natural reserve. In allowing nature to recuperate, humanity would also be throwing itself a lifeline. Instead, Brazil’s newly-elected far-right president Jair Bolsonaro is threatening to let loose agribusiness interests to tear down much of the Amazon rainforest, which produces more than 20 per cent of the world’s oxygen.

In the words of WWF chief Marco Lambertini: “We are the first generation to know we are destroying the planet and the last one that can do anything about it.” If you’re not already freaking out about the perilous state of our world, and demanding that our politicians wake up to reality, now might be a good time to start.

1 Gerry Thornley: Wild reactions to this Ireland team as fickle as the wind
2 Bank leaked my loan request to family who tried to rip me off
3 Irish health officials to ramp up precautions against coronavirus
4 A cardiac problem that could strike at any time
5 Investigation into Dublin housing charity launched
Real news has value SUBSCRIBE