Why we should stop sending politicians to Brussels

Takeover by politicians in recent decades has weakened European Commission 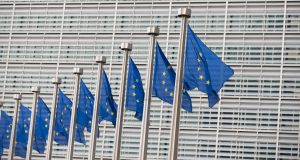 The Berlaymont building, headquarters of the European Commission, in Brussels. Photograph: Jasper Juinen/Bloomberg

The “faceless bureaucrat” slur so beloved of the Brexiteer ultras who have just taken over the British government has always struggled to survive contact with two well-aired facts: of three key European Union institutions, two – the parliament and the council – are filled with elected politicians. That leaves the commission, the EU’s policy engine-room, as the supposed bastion of anonymous technocrats intent on malign subversion of Britain’s sovereign prerogative to, say, pollute its rivers or eat chlorinated chicken.

It’s true that the commission is the least democratic of the Brussels power centres. Its 28 members are not elected; they are nominated by national governments. The same goes for its president; Ursula von der Leyen may have required the approval of the parliament (and just about received it) but EU leaders settled on her name only after a three-day row that consisted of winnowing the field until they landed on the individual who least offended the largest number of governments.

1 Child (4) died of viral infection following nap at Cork creche
2 Miriam Lord: Does anyone care if Leo smoked or snorted?
3 A vegetarian and a non-drinker visit Ireland: here’s their verdict
4 The Turning: This film is a total waste of time. Don’t even read the review
5 Man tested for symptoms linked to coronavirus in Belfast
6 Fintan O’Toole: Historians will not believe sheer ignorance of Brexit supporters
7 ‘I’m not going to go into any more detail’ - Varadkar faces drugs question again
8 Actor alleges Weinstein raped her: ‘I couldn’t fight anymore’
9 Coronavirus: Irish man in Wuhan says city ‘almost like a ghost town’
10 Asylum claims by Georgians and Albanians brought to abrupt halt
11 We are not being submerged by a tidal wave of lethal violence
12 Ryanair wants Irish courts to block Skyscanner from selling its flights
13 Irishman in Tasmania: Some friendships age well, while others, not so much
14 Are there annual limits on inheritances or gifts to a child?
15 Empathy in education: ‘It’s just as important as learning maths’
16 Niall Quinn happy to step into the breach at FAI
17 Rory McIlroy makes a slick start to 2020 with opening 67
18 Election 2020 outtakes: Absent Mary Lou comes out on top
19 Wolves left to rue profligacy as Liverpool roll on
20 Rob Doyle: ‘Frankly, a lot of my life has been disastrous’
21 ‘Serious’ child abuse allegations repeatedly not investigated
22 Stephen Collins: Varadkar and Martin’s jobs are both on the line
23 Newton Emerson: Ruling Sinn Féin out of power in Dublin infantilises Stormont
24 Who are Ireland’s 17 billionaires?
25 How to . . . move (almost) everything to your new phone
26 Scotland’s Finn Russell missed training after Sunday drinking session
27 Mark Hennessy inquest hears two families’ lives ‘changed irreparably’
28 Dolores O’Riordan’s former Howth home for €1.395m
29 Henry Shefflin steps down as Ballyhale Shamrocks manager
30 Moving abroad alone: ‘You wonder why you are leaving everyone who has ever loved you’
31 Pension case study: ‘I found it very humiliating. Horrible’
32 Phil Hogan says EU ready to do ‘ambitious’ UK trade deal
33 Murder accused told gardaí he ‘took rap’ for killing partner’s mother
34 The sad, secret life of Whitney Houston
35 Cathay Pacific to resume Dublin-Hong Kong flights in March
36 Star Trek: Picard review – Patrick Stewart has never been better
37 Facebook ‘looking into’ link between Irish website and firm that breached privacy laws
38 Chance of snow as Ireland set for cold snap from Sunday
39 Great cities, great food: seven places for a gourmet getaway
40 Branches of folklore: the Irish oak, ash, yew and birch
Real news has value SUBSCRIBE