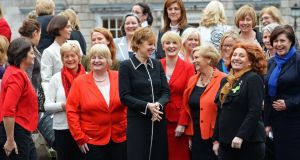 ‘Sometimes it takes a change in the law to change the culture. We may wish it wasn’t so, but wishing and hoping has only got us 16 per cent of women in the Dáil.’ Above, TDs and senators at an event on January 28th, 2014 to mark the historic election in which women first had the right to vote, and in which Constance Markievicz was elected as the first woman TD and MP. Photograph: Eric Luke / The Irish Times

If my great-great-great- great- great granddaughter runs for election in 2265, chances are, she might enter a Dáil where 50:50 gender representation has finally been achieved. That’s because if current trends continue, equal representation of men and women in our parliament is going to take another 250 years.

This Dáil has the highest number of female TDs since the foundation of the State, a mere 16 per cent. After the forthcoming general election, the balance might be tipped more in favour of the 50 per cent of the population who are currently so under-represented. That is because, for the first time, the major parties have to select 30 per cent of female candidates or face a financial penalty. It was interesting that Derek J Byrne in his Opinion article Gender quotas not the answer for woman in politics (March 9th) recognised that the gender quota Bill evades the real issues. In Women for Election we couldn’t agree more.

However, unlike Byrne we believe that the “gender quota solution” is much needed if the pace of change is to be accelerated.

The best international research into why women are so under-represented in politics, which reflects the experience of Women for Election, focuses on those real issues. They are the “five Cs” – confidence, culture, candidate selection, cash and childcare.

Anyone who doubts the stranglehold that men have in local party structures was given a stark reminder recently with the comments of long-time Fianna Fáil councillor Tom Brabazon. According to Brabazon, voters should look to elect “real women with real-life experience of childbirth”. Those left scratching their heads wondering how giving birth qualifies you to represent a constituency, debate legislation and pass laws missed the point.

The reality is that Brabazon seems to have been attempting to denigrate his two female colleagues, neither of whom happen to have children. How better to do this than try to convince the public, and more importantly the voting Fianna Fáil delegates, that neither woman is qualified to be a Dáil candidate.

Conversely some men see having children as the problem. Former Fine Gael councillor Pat Hussey resigned from his party when a woman was added to the local election ticket. He claimed women with children shouldn’t run “because of the exorbitant creche fees they would have to pay” if elected. Such risible comments from these two male councillors would be laughable if they were not so sinister. These men are leaders and people of influence in their local party organisations where women are trying to get on the ticket. If the culture (stated publicly) is so stacked against women, how bad must it be in the room?

Since 2012, Women for Election has trained, mentored and supported women who want to step forward and get on the ticket, or work to support a woman who is seeking to do so. More than 600 women have come through our courses in that time and we have repeatedly heard the same story from women from all parties of just how difficult it is to breech the barrier of candidate selection.

It is evident to us that those confident women, who can overcome the culture challenge must be given support in candidate selection.

It is not patronising or tokenistic, it is merely a practical solution to an intractable problem. Sometimes it takes a change in the law to change the culture. We may wish it wasn’t so, but wishing and hoping has got us only a 16 per cent ratio of female TDs.

The theme of this year’s International Women’s Day was “make it happen”. Women for Election is playing its part. It is up to the parties now to do their bit – even if they have to be legally compelled to do so.

Michelle O’Donnell Keating is co-founder of Women for Election