Why Fintan O’Toole has got Brexit all wrong 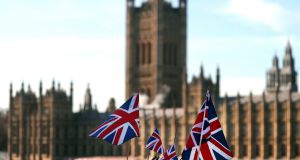 England – Britain – voted for Brexit because they wished to be governed by a parliament and an administration that they understand and on which they have a direct influence through their vote. Photograph: Frank Augstein/AP

Belief in the British empire has a feeble and ghostly life in the mother country, a vigorous one abroad. The Washington Post’s Ishaan Tharoor believes “imperial nostalgia” surrounds and prompts the country’s flight from Brussels – his proof being that ministers are “trying to woo support (that is, trade agreements) from former colonies”.

The popular German comic Oliver Welke used his Heute (Today) TV show to give the UK a “Voliposten” or idiot award as the “most confused island in the world” and wished us “all the best for your global empire”. It’s not absent in Britain: the lawyer and commentator Afua Hirsch sees “the ghosts of the British empire . . . everywhere in modern Britain”.

But the most determined labeller of imperialism as a major factor in the vote for Brexit is a columnist of this newspaper, Fintan O’Toole – whose distinction as a journalist at home and abroad lends resonance to his arguments, but doesn’t improve them.

His book of two months ago, Heroic Failure (Apollo), is a sustained attempt to fix on Britain – or as he more precisely defines it, England – a grand debilitating delusion, the state in the iron mask of imperial nostalgia.

His is a “not unfriendly” endeavour: “When your neighbour is going mad it is only reasonable to want to understand the source of their distress.” It is a project of pity: the approach of a wholly sane man in a white coat pointing out the mental dysfunctions of a gibbering idiot.

He has no trouble in finding examples of British pride and of “innate moral superiority”, proof of the imperial mood. Examples are not confined to blimpish politicians: the bohemian-inclined Cyril Connolly is quoted as seeing the post-war order as one in which the English would play a part of “supreme importance . . . and take on the cares of a confused, impoverished and reactionary . . . Europe”.

Joan Robinson, the left-wing Cambridge economist, believed that the British empire “was not discreditable” and that Britain should “try to show the world how to preserve some elements of civilisation and decency”.

Fair enough, to highlight the Anglo-Saxon attitudes – though these were post-second World War reflections, when a certain amount of national self-regard after the defeat of the Nazis is understandable.

More strange – really weird – is a quite sustained passage, designed to show that the English are wallowing in the self-pitying delusion that Brussels controls them. For this, the fantasy of submission and dominance which is EL James’s Fifty Shades of Grey (2011) is pressed into the imperial service.

O’Toole sees it as not seeming “entirely beside the point” that the book was published in the lead-up to Brexit, with the dominant Christian Grey a proxy for the EU, and the submissive Anastasia Steele “an innocent England seduced into entering into his Red Room of Pain”. . . like England in the sadomasochistic hallucinations of the Brexiteers, she cannot resist the “sweet agonising torture” of playing submissive to Brussels dominant”.

I thought, for the first few paragraphs, that O’Toole would turn about and say: “Just joking”. But no, he seemed to mean it as a valuable insight: similarly lengthy tours of duty are ordered for the Len Deighton novel SS-GB (1978) and Robert Harris’s Fatherland (1992): their themes of a Nazi-occupied Britain serve as revealing the “deep structure of feeling” in England – fear of the Germans’ primacy in the EU.

He’s anxious to point out that Britain was a racist place in the sixties, and so it was. Enoch Powell’s “Rivers of blood” speech was an explicitly racist augury of racial strife caused by the influx of West Indian families. Houses with rooms to let had notices in the windows – “No Negroes, No Irish”. And so it still can be: Stephen Lawrence, a black teenager, was murdered by a group of young white men in south London in 1993 because of his colour.

But racial accommodation comes slowly, especially for those who fear cultural change in their community, or competition in the labour market. Ireland, all but entirely white while the UK was growing steadily more multicultural, has rapidly changed in attitudes to both sexual and racial minorities: Taoiseach, Leo Varadkar, openly gay and of part-Indian descent, is a prominent example.

But like everywhere else, two steps forward may be followed by a step back: in its November 2018 report, the EU Agency for Fundamental Rights ranked Ireland second worst among EU states (jointly with Austria) for violence to black people: and this without benefit of empire. The UK was second best, after Portugal. Social shifts don’t go in straight lines: but in both countries, the trend remains towards acceptance and understanding.

England – Britain – voted Brexit not because its citizens regretted the loss of empire, thought it could be re-assembled, believed that the commonwealth could take its place or saw the EU as a sadomasochistic monster. They wished to be governed by a parliament and an administration that they understand, and on which they have a direct influence through their vote.

Nor were their impulses those of 1960s racists. Lisa Nandy, the Labour MP for Wigan and a remainer, wrote in the New York Review of Books that her “leave-voting constituents have been called stupid, racist little Englanders. The truth is nothing of the sort . . . when people were asked if they wanted to leave the EU, it was an opportunity to push back against one of the most vivid symbols of a political system that is faceless, unresponsive and unaccountable, where decisions are made by people hundreds of miles away”.

England – Britain – has not gone mad. The chaotic scenes in parliament and the thousands of arguments up and down the country bear witness to a deeply democratic and civic culture. Those who prefer politics to be the smooth management of the people by an elite mistake it for dementia. John Lloyd is a contributing editor at the Financial Times