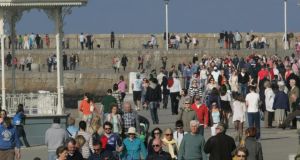 ‘Dún Laoghaire Harbour is seen as a jewel in the crown by most in Dún Laoghaire.’ Photograph: Cyril Byrne / THE IRISH TIMES

Traditionally Dublin empties during the August Bank Holiday weekend with families departing for the far corners of Ireland and further afield. But this year, Dún Laoghaire was a sea of activity.

People attended Dún Laoghaire-Rathdown County Council’s new event on Sandycove green, the Beatyard festival in the old ferry terminal; and many thousands walked the piers or participated in sailing events in the bay.

However, despite the large numbers of visitors, the economy of Dún Laoghaire town remains in a delicate position. Attracting the many visitors from the Dún Laoghaire coastline towards the town is still the top priority in order to increase footfall in the town centre.

The fortunes of the town have improved with Dún Laoghaire Rathdown Council investing heavily in major capital projects, including the new Lexicon Library, improvements to the People’s Park, the covering of the metals and other streetscape improvements. Future plans for the old baths site will come before the council this year.

The town’s Business Improvement District (BID) Company has also worked very hard to attract new businesses, with more than 50 new businesses investing in the town in the past year.

However, the estimated €7 million in lost revenue to the Harbour Company from Stena’s decision to withdraw its service leaves it in choppy waters. Such a large reduction in income means the Harbour Company has to embrace new economic realities and new streams of income. The recent highly successful Beatyard festival and upcoming music events will help to broaden its income base but the promotion of Dún Laoghaire as a destination for cruise liners has to be given serious consideration.

We have already seen the positive effects that the arrival of cruise liners has brought to Dún Laoghaire with an increase in footfall and spending. In order to bring about a larger economic bonus to Dún Laoghaire the proposal for a new cruise berth, to accommodate large cruise liners, has to be given serious consideration.

Already we have seen vocal opposition from some quarters, but let’s study the proposals, let people consider the future of the harbour and town and let’s see alternative suggestions and proposals.

Alison Hackett’s recent piece in The Irish Times was all about the romantic side of Dún Laoghaire, but short on the economic realities. As a history enthusiast and someone who enjoys and respects our heritage, I can appreciate why Dún Laoghaire residents are so proud of the county and harbour’s rich Victorian heritage. But some are shackled by this heritage and many use it to block progress.

In order for Dún Laoghaire to survive and thrive we have to look to the future and not dwell in the past. We have to embrace change and not try to oppose progress.

The economic realities facing the harbour and the council are stark.

Over the next year the harbour will come under the control of Dún Laoghaire Rathdown Council. If the harbour loses its commercial focus and relies on the local authority to subsidise its running costs this will have a dramatic effect on the county.

It’s all about choices. Will the ratepayers and home-owners accept increases in rates or local property tax in order to fill the potential shortfall?

It’s an economic reality that we as councillors may face unless new revenue streams are found in order to put the harbour on a more sustainable financial footing.