Why Chinese and Indian soldiers beat each other to death at 14,000 feet 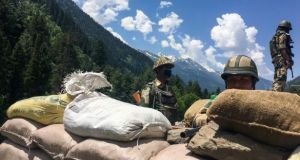 On the night of June 15th this year, during a global pandemic, Indian and Chinese soldiers fought each other in the Himalayas at an altitude of almost 14,000 feet. The clash resulted in the death of 20 Indian soldiers and an unconfirmed number of Chinese casualties – the first time there have been combat fatalities on what is known as the Line of Actual Control (LAC) since 1975.

Under a 1996 agreement signed between India and China, soldiers may carry a personal weapon but commit not to open fire or use explosives within 2km of the LAC. It was reported that the Indian casualties were the result of attacks with rods and bamboo sticks studded with iron nails.

The violent escalation, and the disturbing images that were circulated of the weapons used by Chinese soldiers stoked wide-spread anti-Chinese sentiment in India. It also amplified demands for the government to stand its ground, wean the Indian economy away from any dependence on China and to restrict Chinese firms’ access to the Indian market.

This is ironic given that a major argument during the 1990s was to put the border dispute on the back-burner and focus on improving economic ties between the two. Instead, the border dispute has refused to go away, while the economy has become an instrument of political pressure.

The LAC which acts as the border between India and China is a line whose exact length and delineation is hotly contested. For India the official LAC is 3,488km long, for China it is only 2,000km long. A major part of this discrepancy is due to the disputed status of Aksai Chin, a region contiguous to where the recent violent stand-off took place.

India has never accepted China’s claim over Aksai Chin, which it argues remains part of the disputed LAC. For China, the Aksai Chin plateau provides the People’s Liberation Army with a militarily advantageous position vis-à-vis India. Furthermore, a key national road runs through this area, linking the autonomous provinces of Xinjiang and Tibet.

Other parts of the LAC are also disputed and include a “middle” and an “eastern” sector, which is home to the district of Tawang. This is where the largest Buddhist monastery in India is located and the world’s second largest after the Potala Palace in Lhasa.

China has also often resurrected claims over the entire Indian state of Arunachal Pradesh, a territory of 83,743 km², which China has officially described as part of Southern Tibet. In 2017 a tri-junction border area between China, India and Bhutan became a new flash point of contention which resulted in a two-month stand-off.

The latest incidents along the border and the current impasse are worrying. There is the immediate fallout in terms of bilateral relations but also an important strategic dilemma for India’s longer term calculations and choices to be made.

India has a massive professional army and important additions have been made to land border military infrastructure over the years. India is also a maritime power with the potential to restrict China’s access to the Indian Ocean. This has propelled China to build up a network of allegiances and its naval presence at strategic points across the Indian Ocean.

As India enhances its global maritime ties and engagement also into the South China Sea, it is to be expected that China will seek to increase pressure on the Himalayan border. In its current form the LAC is highly prone to stand-offs and face-offs. It may well be that it is in China’s interest to keep it that way.

While maps have been exchanged for some sectors along the LAC the problem remains that the LAC does not have the international sanctity of a legal agreement. In this, the LAC is completely different from the situation on another important and difficult border, the Line of Control (LoC) between India and Pakistan.

Unlike the LAC the LoC emerged from the 1948 ceasefire line negotiated by the United Nations after the first Kashmir War. It was designated the LoC in the 1972 Simla Agreement that followed the third war between India and Paksitan.

Also unlike the LoC with Pakistan, the border with China is not physically held by the army or border forces, at all times. Instead there are physical markers on the ground which have been chosen for their location and which are patrolled by both sides at different times.

As a result, it becomes difficult sometimes, especially in a fast-moving situation, to know whether or not a Chinese or Indian incursion has in fact occurred. Under normal circumstances, patrols are carefully timetabled and governed by a complex and highly choreographed set of protocols.

Apart from the LAC there are other land-based pressure points that can be used to deflect or direct attention. These include claims that have been made by China vis-à-vis Bhutan with implications for India as the Himalayan kingdom’s virtual guarantor of security.

Earlier this year an ugly row erupted between India and Nepal, also over an issue of territory. In this case the speculation has been that China’s intensive involvement in Nepalese politics helped foment the crisis.

As India takes on a far more visible role in global politics especially within the rapidly evolving format of the “Indo-Pacific” and “the Quad” (involving the United States, Japan, Australia and India), India-China relations are likely to get more volatile.

The current border dispute is both a reason for and symptom of this key dilemma, China would prefer to keep India hemmed in using diverse border challenges. India on the other hand needs to ensure its territorial integrity and its command over the Indian Ocean.

Jivanta Schottli is assistant professor in Indian politics at DCU