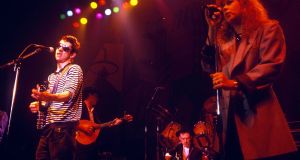 Shane MacGowan of the Pogues with Kirsty MacColl: debating the lyrical impropriety of their song has become an annual tradition.

It seems to come round faster every year, doesn’t it? One moment we are navigating the transition from summer into autumn, and then, all of a sudden, lights are hung on Grafton Street; wreaths appear on our neighbours’ doors; and we are caught in the throes of December’s most well-worn tradition: debating the lyrical impropriety of Fairytale of New York by the Pogues and Kirsty MacColl.

This year the BBC has led the charge over this well-flogged and very dead horse. BBC Radio 1 announced last week that it won’t play the original version of the song, replete with a homophobic slur – instead opting to broadcast a cleaner version with amended lyrics.

9 Covid-19: How are other EU countries dealing with schools?

14 Colum Eastwood: Seamus Mallon’s offer is still on the table if unionism is interested

15 Ken Early: Özil a symptom of Arsenal’s stagnation not a cause

22 Michelin 2021: The Irish restaurants in the running

25 Regrets for Munster as Leinster find a way, again

27 Could a Covid-19 smell test help bring coronavirus under control?

28 Covid-19: How to look after yourself if you catch the virus

29 Traveller who tried to book hotel wedding awarded €15,000 for discrimination

32 Emma de Souza: My generation deserves to have its say on Irish unity now

33 New building for Greystones school operating out of tennis clubhouse

34 Oscar Wilde, my grandfather, ‘talked himself into prison’

37 How did a remote Mayo town become Ireland’s most Covid-infected place?