Viewpoint: Cruise ships proposal for Dún Laoghaire should be rejected 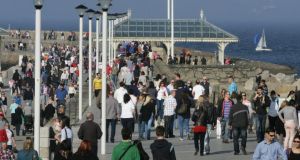 ‘My second suggestion is that walking the pier in Dún Laoghaire becomes one of the top 10 tourist attractions for all visitors to Dublin.’ Photograph: Cyril Byrne / THE IRISH TIMES

The men that quarried out the granite to build the East and West piers in Dún Laoghaire harbour hardly had cruise ships such as the Titanic in their minds. These were still a century away from anyone’s imagination. More likely, they were happy to have regular work to keep a roof over their heads and food on the table. Now, in the 21st century, the reality is that a super sized cruise ship is a form of floating micro-economy which ports around the world compete to attract. Dún Laoghaire (via a Dún Laoghaire Harbour Company proposal) is currently flirting with the idea that it becomes the second place in Ireland (after Cobh) to allow liners dock in the harbour, instead of relying on tenders ferrying the passengers in. This would require a new quay and dredging the harbour – a large-scale, expensive project.

It is suggested that the increase in visitors who could just “step off the ship” right onto the seafront would significantly help the ailing town, and this is undoubtedly so. But underneath the surface, what is not quite so obvious is that the Harbour Company would also secure a very badly needed lifeline for its own financial woes (and jobs).

Dún Laoghaire harbour wasn’t built for super-sized cruise ships. Placing a 430m quay in the centre of the harbour to accommodate these floating skyscrapers (as proposed by Dún Laoghaire Harbour Company in its public consultation) will, in my opinion, destroy its natural open shape and beauty; not to mention the disruption to the very active sailing and boating communities that use the harbour every day, and intensively in the summer months. There is something inherently wrong about fundamentally changing the structure of a harbour just to suit the liners, and no one else. Shouldn’t the liners adapt to suit us (the citizens) and our long-term vision for the town?

As this is at a public consultation phase (the proposal is currently with An Bord Pleanála, and open to submissions and objections), it is important to offer some alternatives as opposed to simply opposing every development with a Luddite mentality.

There are other ways to entice the passengers in to Dún Laoghaire.

The Harbour Company and the county council could offer a comprehensive ferrying service to any liners coming in to Dublin Bay. This could be free or low cost, or subsidised by the Business Improvement District, the property tax, lottery money or even with central exchequer grant aid. There are already a number of commercial tourist boats operating in the bay, so it shouldn’t be difficult to extend this to specialise in the liners’ trade.

Why not have a guided excursion from the liner to motor around Dalkey island, pass by Joyce’s Tower, view the forty-foot swimmers and then on into Dún Laoghaire so they could walk the pier and visit the town?

My second suggestion is that walking the pier in Dún Laoghaire becomes one of the top 10 tourist attractions for all visitors to Dublin.

The zoo, Guinness Storehouse, the National Gallery, the Book of Kells and other city centre attractions get the lion’s share of the tourist trade. The Irish Tourist Industry Confederation said that there were almost seven million visitors to Ireland in 2013, bringing more than €4 billion into the economy. If the Dún Laoghaire town plan was developed to suit all comers – be they Irish residents or tourists – then we are more likely to keep it fit for purpose as a working town. Those villages and towns (in any country) that become too narrowly focused on one type of tourist are at risk of collapsing if a global economic crisis hits. Even now, Dún Laoghaire, with its stunning new library and seafront is a place that visitors would regret not seeing during their time here.

Dún Laoghaire takes its name from a fort built on the coast by High King Laoghaire in the fifth century. The foundation stone for the East pier was laid in May 1817. And now in the 21st century we have these two beautiful granite piers almost 200 years old – the jewels in the crown of Dublin Bay. I say stand proud Dún Laoghaire. We’re not for sale.

Alison Hackett is a resident of Dún Laoghaire and the author and curator of The Visual Time Traveller: 500 years of history, art and science in 100 unique designs.

1 ‘Frustrated and angry’: Thousands march in Dublin to protest death of George Floyd
2 Normal People: Full-frontal nudity was not its most radical feature
3 Simple restorative exercises that can improve your posture after all the sitting
4 Covid-19: Easing of restrictions ‘unlikely’ to be speeded-up
5 Should my mam wait for house prices to drop before buying?
Real news has value SUBSCRIBE