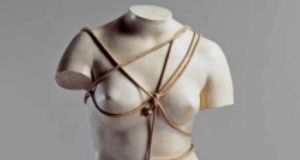 Venus Restored (1936) is the work of artist, Man Ray (1890-1976). The website states, “While acknowledging the anger, Cardinal Ravasi has chosen not to remove the image as it speaks clearly for one of the central points of the document: many women, alas, are still struggling for freedom (bound with rope), their voices and intellect often unheard (headless), their actions unappreciated (limbless).”

How has a headless, truncated, nude, female bondage image recently acquired pride of place on the website of a Vatican all-male body?

The pontifical council for culture is a department of the Roman curia entrusted with the relationship of the Catholic Church with different cultures. It is headed by Cardinal Ravasi and has 31 members, mostly clerics, and a few laymen “men of culture”. There is not one “woman of culture”.

In addition there are international consultors, experts to advise the council. There were 17 male consultors and five females when Pope Francis appointed another 10 men and two women in 2014, reducing further the low proportion of women .

The council regularly holds a plenary assembly in Rome and the theme this year was “Women’s Cultures: Equality and Difference”. After a public opening day, the main meeting which was held between February 4th and 7th was reserved for the members and consultors.

In advance of the meeting a discussion document was made public and posted on the Ppontifical Ccouncil&#8217;s website.

To introduce that document on women’s cultures the council chose to illustrate it with one very graphic image. The image is a frontal view of Venus Restored, a plaster cast of an amputated nude female torso with the exposed breasts, belly and pubic area tightly bound with rope. There is no head/face, no arms and no legs. Venus Restored (1936) is the work of a male artist, Man Ray (1890-1976). Like other male artists linked to the Dada and Surrealist movements, Man Ray objectified women and saw them as subordinate: there was a strong connection between artistic achievement and sexual prowess, specifically power over women.

By his own account Man Ray as an adolescent sexually abused a 10-year-old girl, and later brutally assaulted his former wife.

How, why and by whom was this disturbing image chosen? There is no reference to it in the document.

And while it is imperfect in fully articulating the purpose of the assembly, “it’s not a headless or armless body, but a reflection on classic tradition and the possibility of rediscovering a role in contemporary life”.

A different explanation has now emerged on the council website: “Some complaints have reached the dicastery concerning the image above.

While acknowledging the anger, Cardinal Ravasi has chosen not to remove the image as it speaks clearly for one of the central points of the document: many women, alas, are still struggling for freedom (bound with rope), their voices and intellect often unheard (headless), their actions unappreciated (limbless).”

Is he referring to the exclusion of women from church governance and ordained ministry?

The fact that no woman will have a vote at the synod on the family next October, as last October?

I do not see myself, or other women, through any man’s eyes and certainly not Man Ray’s eyes. I see myself as beautifully made in the image of God, whole and free.

I do not believe this image is a fitting symbol to represent us women, including our suffering and oppression in the church (and outside it) of which I have personal experience.

This image does not liberate, but endorses and perpetuates what it depicts: a male fantasy of power over women. It is as unrepresentative of women as Man Ray’s other work Prayer is of prayer.

It is a perversion of the Gospel that this headless dismembered bondage female image represents women while all images of women presiding at the Eucharist which had been sent in by women were censored out of the display on the public day.

Now is the time for the church to remember that woman in truth can say: “This is my body.” Soline Humbert is a spiritual guide and an advocate for women’s ordination