Una Mullally: We must avoid extremes in the abortion debate 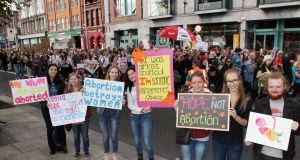 Anti-abortion campaigners protest at the March for Choice in Dublin on Saturday. Photograph: John Mc Elroy

The March For Choice on Saturday organised by the Abortion Rights Campaign was a momentous occasion. It was a tipping point, a demonstration that the support for free, safe and legal abortion extends far beyond the considered decision of the Citizens’ Assembly.

The diversity of the crowd was noticeable, as families, children, men, women, trans people, people from all over Ireland, young and old, gathered in their thousands.

1 Covid-19 outbreak recorded on ward at Naas General Hospital
2 Ireland among countries urged to consider reinstating Covid-19 restrictions
3 Russia approves Covid-19 vaccine after less than two months of human tests
4 Irish Michelin two-star restaurant to sell kebabs and fries from takeaway trailer
5 ‘I’ve been sleeping with my girlfriend’s sister. I need help. What do I do?’
6 Further Covid-19 cases could see local restrictions extended, expert warns
7 Senator Lynn Ruane: I had a few wild years. Pregnancy calmed me down
8 Covid-19: New Zealand’s largest city in lockdown after first local case in 102 days
9 Sinn Féin apologises as member resigns over social media abuse
10 Fintan O’Toole: Turning a blind eye to meat plants a very old habit
11 Revised help-to-buy scheme for first-time buyers open for applications
12 Maura Higgins: ‘I really hated it. Apart from that massage, the rest of it can kiss my ass’
13 ‘No demand... because there are no people’ at well-known Dublin pub
14 Talk of a Covid-19 vaccine by spring of 2021 is just too soon
15 Covid-19: Face coverings not mandatory in Michael Healy-Rae’s shop
16 Religious oaths must be removed from State activities
17 Scientists find link between strokes and winter air pollution in Dublin
18 Sinn Féin TD says ‘good riddance’ to member who resigned over sending abusive messages
19 Different Strokes: Shane Lowry enters last chance saloon
20 Divorce: What will it cost and can you afford it?
21 Teenager charged over death of Kimberly O’Connor in car crash
22 When will the first Covid-19 vaccine be used in Ireland?
23 Post-Covid television starts to shape up – but with missing pieces
24 BP worker sacked over Hitler meme wins AU$200,000 in compensation
25 Galgorm Castle resort could rescue 2020 Irish Open
26 Management of Irish PR group Drury acquire agency from Omnicom
27 Apple received $250bn dividend from Irish subsidiary in 2019
28 Coronavirus: No further deaths and 57 confirmed cases reported in State
29 No buns, no sauce, no fries, no wedges: How to make the perfect chip butty
30 ‘We feel we are in limbo’: Wedding plans in chaos due to Covid-19
31 Kathryn Thomas goes staycationing just as new travel restrictions come in
32 Coronavirus: Three children test positive at creche in Co Meath
33 Are we really facing the death of the office?
34 Expired driving licences to remain valid for seven months
35 Nearly 30,000 could lose pandemic payment if they do not confirm eligibility
36 Transferring the family farm without a tax headache
37 Coronavirus: Non-essential travel from US set to be banned within days
38 O’Doherty ‘trying to evade’ service of defamation proceedings, court hears
39 Gerry Thornley: Consistent trailblazers New Zealand once again ahead of the posse
40 New crime fiction: Shot in the arm for the hackneyed serial killer yarn
Real news has value SUBSCRIBE