Una Mullally: We are good at denial and now must pay the price

People who should know better broke Covid-19 guidelines, but messaging came from the top 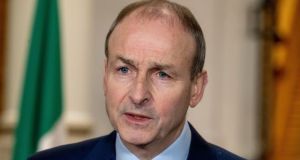 Micheál Martin’s populist insistence that people could be ‘given’ a Christmas reprieve led to actions that people previously would have avoided. Photograph: Julien Behal

Resilience isn’t something that arrives, it’s something that’s built. Now, instead of turning away from the worry of the current context, we will have to draw on our reserves, on what we have learned over the past year and the new tools we have acquired, to traverse this darkest month. We aren’t less able to deal with harsh times having already experienced them, we are better able, even if the accumulation of stress and difficulty feels ever more grinding.

If your head is spinning right now, I don’t blame you. Among mixed messages, information vacuums, unclear figures and muted politicians, a crisis is escalating. There is a sense of a scramble in the background, that things are spiralling out of control, that systems are overwhelmed and that people are numbed by confusion, unable to properly engage with the situation.

6 Exit from Level 5 requires sharp fall in cases and will be gradual, says Tánaiste

8 ‘Horrendously out of proportion’: Residents set against 19-storey apartments

12 Who is going to pay for costs of working from home?

15 ‘I think my husband has a drug problem, but he says that’s nonsense’

16 Joe Biden can bring either unity or change – not both

17 Range Rover Sport D350: Fab to drive. But everyone you pass will hate you

19 Kathy Sheridan: Pandemic is reminder of poison in British and Irish politics

22 Michael Harding: Just after Christmas, I began talking to the birds

24 A sizzling recipe to convert the sceptics

28 The chickpea stew that broke the internet in the US is here. Give it a go

29 Róisín Ingle: The gin is now part of my daily routine

30 Gordon D’Arcy: Irish lineout has to move past mess of 2020 for the Six Nations

36 Covid-19: Not everyone quarantining at home will face garda checks, Minister says

39 AIB and Irish Life in advanced talks on joint venture