This election is rooted in the recession, housing crisis, and the politicisation of young people

Taoiseach Leo Varadkar has ruled out forming a coalition with Sinn Fein and has believes it could be "a number of months before we're in a position to form a government". 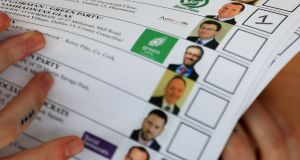 Sinn Féin appeals to a renewed sense of ambition and self-belief from within the country. Photograph: Donall Farmer/Getty Images

On the eve of the election, two leaflets dropped through my letterbox in Dublin Central in quick succession. One was a letter from Joe Costello, thanking residents in the area for their courtesy towards him and his canvassers in the course of the campaign. The other was from Paschal Donohue, which concluded “protect our country and your job from Sinn Féin”. Maybe that message would work in a middle-class area where Sinn Féin had a marginal chance of nicking a final seat, but this is Mary Lou McDonald country, where thousands would be voting for her the following day.

What this demonstrates is how Fine Gael had lost it. When their campaign flopped in the initial days, they spent the remaining weeks attacking both Fianna Fáil and Sinn Féin, and forgot to tell the electorate what they were about. For his part, Leo Varadkar had a decent campaign, appearing personable and competent. But Fine Gael’s problems run far deeper. The party pretends not to have an ideology, that its aura and experience of privilege is merely the default, but the electorate has clearly objected to how the country is being rebuilt after the initial recession-era emergency.

1 ‘IRA has gone away’: McDonald responds to Garda Commissioner’s comments
2 Drug dealer loses codes for €53.6m bitcoin accounts
3 A Dad with brain cancer: I was given 18 months to live, it put things into perspective
4 Jogger injured by galloping horse could face substantial legal bill
5 Courts Service gets orders over social media postings about elderly woman
6 Knock gets visit from world’s largest passenger plane
7 More than 25 people to sue over circulation of images taken at Dublin Garda station
8 Ben Affleck: ‘It took me a long time to admit I am an alcoholic’
9 Who turned up to the Dublin casting call seeking ‘bone thin, amputees, crooked teeth’?
10 Man stalked woman for weeks before climbing into flat armed with hammer
11 Politician’s son avoids jail for lighting firework in Copper Face Jacks
12 Stephen Collins: Reluctance of Fine Gael and Fianna Fáil to govern understandable
13 Varadkar says any Fine Gael deal would have to recognise strength of its vote
14 The close links between Sinn Féin and IRA untangled
15 MV Alta: The unmanned voyage of the Ballycotton ‘ghost ship’
16 ‘How can we torment a bunch of millennial snowflakes and get away with it?’
17 Steve Coogan says ‘my Irish passport will be arriving shortly’
18 Man who crashed stolen bicycle into English tourist jailed for eight years
19 L’Ecrivain, Derry Clarke’s Michelin-starred Dublin restaurant, to close after 31 years
20 ‘Manchester United are lucky to have you’: Klopp responds to Donegal schoolboy’s letter
21 Derry Girls’ blackboard goes on display as a museum piece
22 Iain Henderson ruled out of Ireland’s Twickenham visit
23 Men with catapults to protect Trumps from monkeys at Taj Mahal
24 Creche owner where girls allegedly assaulted had wanted ‘male role model’ for children
25 Why Sweden ditched its negative rate experiment
26 The movie quiz: Who really controls James Bond?
27 Chance encounter with gardaí unmasked bitcoin millionaire drug dealer
28 Six Nations: Ireland v England all you need to know guide
29 Dr Pepper owner in talks to take over former Lidl distribution centre
30 United greats in attendance as club hero Gregg laid to rest
31 High Court quashes permission for Ronan dockland tower
32 Dot Cotton actor June Brown leaves Eastenders after 35 years
33 Paraic O’Donnell: MS is meticulously destroying me. I am being unmade
34 A maverick taking on the Irish whiskey establishment
35 Will Avolon find itself on the block as China prepares to seize troubled parent HNA?
36 Teenage girl (16) killed in Cork crash named as Kimberly O’Connor
37 Lottery luck for syndicate set up to raise money for community centre
38 So you still have an eircom.net email? Here is what you need to do
39 Student reaction to rent hikes ‘emotional’, says UCD president
40 Serving fireman charged with possessing cocaine at Tipperary fire station
Real news has value SUBSCRIBE