Una Mullally: Racism is endemic in Ireland but the young have had enough 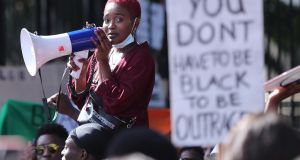 People at a Black Lives Matter protest rally outside the US embassy in Dublin on Monday, June 1st. Photograph: Niall Carson/PA Wire

Space is often carved out in the aftermath of an unexpected explosion. Sadly, tipping points of social change tend to be instigated by tragedy, and the accumulation of tragedies before them, until a certain atmosphere coalesces. What we saw in Ireland last week was a tipping point, a profound shift – generational, social, cultural – that culminated in perhaps the largest ever moment of solidarity against racial injustice here. As well as smaller protests around the country, two large demonstrations in Dublin on Monday and Saturday have changed the game. The bravery and leadership of young people of colour in Ireland has brought our country’s issues of racial injustice to the fore.

In the aftermath of the Black Lives Matter protest in Dublin on Monday, there was a discussion about public health. This was indeed an extraordinary situation. In the middle of a pandemic, people had gathered to protest in large numbers, something that is technically against regulations.

1 Ireland among countries urged to consider reinstating Covid-19 restrictions
2 ‘I’ve been sleeping with my girlfriend’s sister. I need help. What do I do?’
3 Irish Michelin two-star restaurant to sell kebabs and fries from takeaway trailer
4 Fintan O’Toole: Turning a blind eye to meat plants a very old habit
5 Sinn Féin apologises as member resigns over social media abuse
6 Maura Higgins: ‘I really hated it. Apart from that massage, the rest of it can kiss my ass’
7 Russia approves Covid-19 vaccine after less than two months of human tests
8 Talk of a Covid-19 vaccine by spring of 2021 is just too soon
9 Further Covid-19 cases could see local restrictions extended, expert warns
10 Covid-19: Face coverings not mandatory in Michael Healy-Rae’s shop
11 ‘No demand... because there are no people’ at well-known Dublin pub
12 Religious oaths must be removed from State activities
13 Revised help-to-buy scheme opens for applications
14 Senator Lynn Ruane: I had a few wild years. Pregnancy calmed me down
15 Global Covid-19 cases pass 20m as WHO points to ‘green shoots of hope’
16 Divorce: What will it cost and can you afford it?
17 Covid-19: We must be hunters of the virus - not its prey
18 New Covid-19 cases recorded in New Zealand after 102 days without a local infection
19 Apple received $250bn dividend from Irish subsidiary in 2019
20 Different Strokes: Shane Lowry enters last chance saloon
21 Transferring the family farm without a tax headache
22 When will the first Covid-19 vaccine be used in Ireland?
23 BP worker sacked over Hitler meme wins AU$200,000 in compensation
24 Kathryn Thomas goes staycationing just as new travel restrictions come in
25 Gerry Thornley: Consistent trailblazers New Zealand once again ahead of the posse
26 Coronavirus: Three children test positive at creche in Co Meath
27 ‘We feel we are in limbo’: Wedding plans in chaos due to Covid-19
28 Nearly 30,000 could lose pandemic payment if they do not confirm eligibility
29 Coronavirus: Non-essential travel from US set to be banned within days
30 Post-Covid television starts to shape up – but with missing pieces
31 ‘I have become a shouter, and I am worried it is damaging my children’
32 No buns, no sauce, no fries, no wedges: How to make the perfect chip butty
33 The patriotic cellist who refused to play Rule, Britannia!
34 O’Doherty ‘trying to evade’ service of defamation proceedings, court hears
35 Prisons see huge increase in ‘hooch’ seizures during lockdown
36 HSE says fix for Covid Tracker app rolled out to all Android users
37 Do we need to be concerned about taking a Covid-19 vaccine?
38 Coronavirus: No further deaths and 57 confirmed cases reported in State
39 Cairn Homes revenues down but average price of starter homes nudged up
40 ‘Customers are very confused’: Motor dealer outlines EV reality
Real news has value SUBSCRIBE