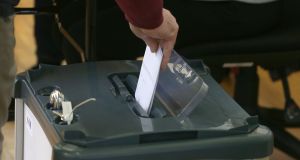 This election was coloured not just by the desire for change, but also an electorate being able to conceptualise the possibility for change because of how much Irish society has changed in the past five years or so. Photograph: Damien Eagers

One of the outcomes of the 2020 general election is that it poses – and in some ways answers – questions about the impact of the social revolution in Ireland emerging from the marriage equality and Repeal movements. The disruption of electoral politics through gains made by Sinn Féin and other left-wing candidates, can be framed as a continuation of an electorate’s intent on moulding the political landscape of the country in its own vision. This is a fluid process, which is unpredictable, but in which change will continue to be a constant.

In June 2018, I wrote that Sinn Féin would be a beneficiary of the Repeal movement, as it emerged from the referendum as the only large party with a woman leader, primed to capture female voters and new middle-class voters for whom Gerry Adams was fast becoming a memory. But the impact of the Repeal movement in particular, which was larger than the marriage equality movement simply because reproductive rights impact more people in Ireland than marriage rights for same-sex couples, will perhaps have a larger legacy that is difficult to quantify. What we can reflect on at this point is the political engagement of younger people, and the ideals that underpinned the movement – solidarity, equality, progress, empathy – and the focus on issues rather than traditional party loyalties, contributed to the election outcome.

1 Coronavirus: No swift return to ‘normal state of affairs’, warns expert
2 Coronavirus: Ireland will have to ‘live alongside the virus’
3 Chief medical officer urges people not to visit hardware stores
4 French police turn back private jet of holidaymakers from UK
5 Barcelona in crisis as six board members resign in protest
6 I’m off the booze. ‘I love you so much,’ my wife said. Granted, she was talking to her wine
7 Leaving Cert students: ‘We just need clarity now’
8 Good news: Jacinda Ardern’s leadership masterclass and four other feel-good stories
9 Government should question necessity of passenger flights – Immunology expert
10 Coronavirus: How the Covid-19 crisis may reshape air travel
11 Coronavirus: Government to extend restrictions for at least two weeks
12 Dublin imam returns home after week in ICU with coronavirus
13 Coronavirus: New York reports new high for deaths as cases soar
14 Home School Hub: Múinteoir Ray teaches kids when to don the gas masks
15 Coronavirus: ‘Satan and a virus’ won’t close some US churches on Sunday
16 Growing hope in Government of partial easing of restrictions after May bank holiday
17 Euro zone deal explained: Breaking down the detail of the €500bn funding
18 Coronavirus: Irishwoman in Cayman Islands on living under 24-hour lockdown
19 Quiet ferries suggest holidaymakers have heeded lockdown warnings
20 Is this the best fish chowder in the world?
21 10 Good Friday traditions you’ve never heard of
22 Coronavirus: Ryanair suspends refunds and offers passengers vouchers instead
23 Coronavirus: More ‘striking’ evidence BCG vaccine might protect against Covid-19
24 Singapore halts use of Zoom for home-schooling after hack reports
25 Coronavirus: Privacy advocates say HSE planning a ‘super app’
26 Diarmaid Ferriter: Tim Robinson long understood what crisis has taught us
27 Irishwoman on how Covid-19 is affecting Luxembourg
28 Doctors sent to help at Cavan hospital after up to 70 staff infected with coronavirus
29 This time, the future of the euro really is at stake
30 Ireland unlikely to access EU rescue package, says Donohoe
31 Garda body criticises ‘excessive’ bleep tests for recruits
32 Mixed forecast as sunshine to be replaced by rain on Easter Sunday
33 Domestic violence victims exempt from 2km travel restriction
34 Government flying blind on lifting restrictions
35 FF and FG will not give ‘fait accompli’ to other parties
36 Republic’s Coronavirus death toll rises by 28 as confirmed cases up by 500
37 Three chances to be given for breaching coronavirus restrictions
38 Dutch go out on limb in fractious negotiations on aid for fellow EU states
39 Coronavirus: Is insufficient testing a big weakness in our attack?
40 Ireland boss Stephen Kenny: ‘I’ll do things my own way. Put it that way’
Real news has value SUBSCRIBE