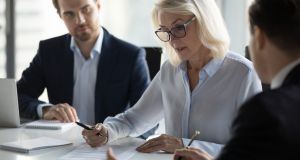 Memo to companies: stop the gender-washing, box-ticking corporate feminism and really get to grips with the root causes of inequality in the workplace. Photograph: iStock

It’s International Women’s Day season, and on we go, muddling through gender equality. There are some incredibly worthwhile, fun, and important events taking place. And then there’s the gender-washing, box-ticking, corporate feminism jogging alongside them.

Paradoxically, these activities can act as useful gateway drugs to smashing the systems they attempt to uphold, But they also co-opt modes of thinking and being that were not meant to be subsumed into conference rooms. There are of course many feminisms. It’s not a competition. But the rhetoric of female empowerment within hierarchies of corporate culture makes me queasy. Incredibly, some massively wealthy companies expect some women to speak at these things for free. A great way to “empower” and “inspire” women is to pay them for their work.