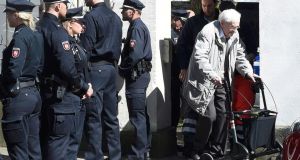 ‘The argument over putting nonagenarians on trial overlooks one group who will never stand trial over the Holocaust: the lawyers, civil servants and politicians in the two post-war German states who worked assiduously to prevent such trials ever taking place.’ Above, defendant Oskar Gröning(right) leaves the court after the first day of his trial in Lueneburg April 21st, 2015. Photograph: Reuters/Fabian Bimmer

On a bright and cold morning in January, shortly before the 70th anniversary of the liberation of Auschwitz, I found myself walking around the death camp memorial with a rising dread in my bones.

This was not an accumulated dread from learning about the Nazi atrocities committed in this red-bricked factory of death. No, the dread derived from my lack of emotional response to what I was seeing on my third visit to the memorial. Was this jaded indifference, I wondered, the price for living in Germany and being exposed regularly to reports of Nazi atrocities?

Standing in front of the pile of battered, dusty suitcases, I struggled again to grasp what actually happened here: a million murders of the most terrible kind.

Then I saw a familiar address, painted in careful white letters onto a black case. It was an address two streets from mine in Berlin. The owner once lived five minutes from me and was long gone, but her case was still here. In a moment of terrible relief, my Auschwitz apathy lifted.

Oskar Gröning, who gathered these same suitcases and stole the valuables inside, went on trial yesterday in the western city of Lüneburg. Now 93 and unable to walk unassisted, the widower read a statement to the court explaining how he came to the camp, the horrors he saw and the his attempts to get out again.

The gas chamber killings over one million people in the Auschwitz-Birkenau camp was “outside of his area of work”, he told the court, but he “recognised without question” his “moral guilt”. It was up to the court, he said, to reach a verdict on the charges he faces: assisted murder in 300,000 cases.

The trial of Oskar Gröning, like other recent trials of elderly Nazis, divides opinion in Germany and around the world. What is to be gained, some wonder, by putting on trial, seven decades on, men like Mr Gröning who refers to himself as a “small cog” in the Nazi machinery.

But Holocaust survivors, families of Nazi victims and those who campaign on their behalf have no time for such arguments. Murder is murder, they say, and there is no statue of limitations on such a crime.

Dr Efraim Zuroff, a Nazi hunter at the Simon Wiesenthal Centre, says the elderly people are on his wanted list not for how frail they look today but for how, as energetic young people, they killed men, women and children for a hate-filled ideology.

Yet the argument over putting nonagenarians on trial overlooks one group who will never stand trial over the Holocaust: the lawyers, civil servants and politicians in the two post-war German states who worked assiduously to prevent such trials ever taking place.

While the post-war population were busy struggling to rebuild their lives, the German establishment protected its own. Public prosecutors refused to open investigations without concrete proof of a specific Nazi-era crime. Without this often impossible burden of proof, they refused to cast their net into the sea let alone drag it back to shore and inspect the contents. And so, the big Nazi fish swam free.

A recent German film,“Labyrinth of Silence, dramatises how it took a few renegade prosecutors to put Auschwitz officials on trial in Frankfurt in 1963. But official apathy and obstruction hampered their effort to apprehend Adolf Eichmann, the architect of the Holocaust, on his regular trips home to Germany from Argentina.

Today a new generation of German prosecutors are willing to lower the legal hurdles, investigating and pressing charges against those even with only indirect involvement in war crimes. The first such case was of former SS guard John Demjanjuk for war crimes at the Sobibor camp in occupied Poland. Though Demjanjuk died in 2012 before his conviction was finalised, it triggered a final wave of Nazi war crimes trials that expanded the dwindling pool of suspects by diluting the seniority of those under investigation.

Yet, while elderly Nazis and their victims meet belatedly in court, two generations of German prosecutors will never be held accountable for their moral guilt of letting countless cases get away through decades of official Auschwitz apathy.