Jennifer O’Connell: The footage is unsettling when juxtaposed with closure of Bewley’s 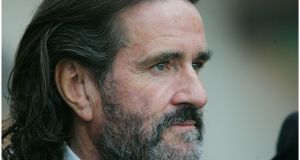 Developer Johnny Ronan said he was entirely unaware of the threat of coronavirus at the time the videos were recorded. Photograph: Bryan O’Brien

Johnny Ronan was known in some media organisations during the Celtic Tiger as ‘the buccaneer’. It suited him, from his sheriff of Nottingham hair, to his €640,000 Maybach, to the swagger with which he conducted some of his personal relationships – on one occasion, sending a press release to the newsdesk of TV3 to announce the ending of his relationship with TV3 presenter Glenda Gilson.

Ronan has cut a quieter figure in recent years, as he rebuilt his empire and personal wealth after the crash, to the point where he now says he has seven million square feet of projects in the development pipeline. But despite the sycophantic ‘He’s back!’ headline that greeted his emergence from the National Asset Management Agency in 2015 with all of his debts repaid, he wasn’t really back – at least not at his previous levels of ‘Let’s fly to Morocco for dinner, Rosanna’ ostentation.

1 Mary Trump: The inside story of why she wrote a tell-all memoir
2 Paschal Donohoe’s election as Eurogroup president ‘a great win for Ireland’, says Taoiseach
3 Covid-19: Cases increasingly occurring among young people, officials say
4 Land Rover lookalike Ineos Grenadier revealed
5 ‘A new lockdown in Melbourne has shattered our spirits’
6 Sweden’s grim Covid-19 result: More death and nearly equal economic damage
7 The more London’s lockdown eases, the clearer the crisis becomes
8 Why does philosophy have a problem with race?
9 Reimagined Rathmines townhouse now a four bed for €1.295m
10 Warning of serious brain disorders in people with mild coronavirus symptoms
11 Donald Trump is an amateur populist – the real trouble is yet to come
12 Newton Emerson: Funeral raises questions over how much SF president McDonald is in charge
13 SDLP acknowledges ‘immense hurt’ after councillors oppose ‘Omagh’ extradition
14 Yellowstone: Kevin Costner looks like he’s just stepped on something sharp
15 Dave Hannigan: Notre Dame’s Fighting Irish leprechaun needs its ass kicked
16 Johnny Depp trial: The hidden benefit of celebrity domestic violence allegations
17 Departmental shake-up does not bode well for long neglected biodiversity crisis
18 Kanye West to run for president? Welcome to weirdsville, US
19 Mary Trump’s book: Eight of its most shocking claims about the US president
20 The Irish Times view on Sweden’s laissez-faire approach to Covid-19
21 Dublin rappers Versatile criticised over 'misogynist and racist' lyrics
22 Dublin man caught with child porn by undercover FBI agent is jailed
23 Dáil committee to investigate Bríd Smith comments about judge
24 Mrs America: Cate Blanchett and Rose Byrne light up the screen
25 Mother and five children sleeping in car while seeking accommodation
26 US supreme court rules prosecutors can obtain Donald Trump’s financial records
27 Covid-19 fatalities in convent highlight need for review, researchers say
28 ‘Prepare for January’: European Commission warns as Brexit trade talks stall
29 Fauci says some US states should consider shutting down again
30 Taoiseach needs to show zero tolerance for dubious ministerial behaviour
31 Amy Schumer, in tears: ‘I know how I am. No one else can deal with it’
32 Finding the Way Back: A career-best performance from Ben Affleck
33 Planning a move to New Zealand? Here’s everything you need to know
34 Naomi O’Leary: Ireland’s travel policy curbed by Britain
35 Depp may have severed own finger, according to email to doctor, court told
36 Masters plan for November shows Augusta National is out of touch
37 Airborne coronavirus: What you should do now to help yourself stay safe
38 Ex-associate of crime kingpin Brian Rattigan targeted in Garda raids
39 Melania Trump: ‘A sphinx with a rubber eraser in place of a tail’
40 If the artist offends, should we pluck out their work?
Real news has value SUBSCRIBE