The Irish Times view on the climate crisis: world powers must step up 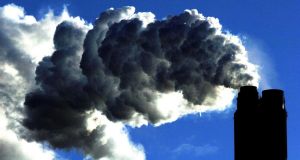 On climate politics, the world is in a better place after a difficult year. Momentum seemed to be dissipating early in 2020, when developed countries – those most responsible for carbon emissions – were due to scale-up ambition under the Paris Agreement.

Covid-19 has been a terrible distraction since, yet despondency was already taking root because declared actions at that point were clearly inadequate. In contrast, world leaders in mid-December sent a strong signal of willingness to step up commitments at a virtual UN summit coinciding with the pact’s fifth anniversary.

The Trump era is ending. Armed with a substantive climate package, incoming US president Joe Biden has committed to re-joining the agreement, the European green deal is gearing up, and a €672 billion EU recovery fund in in place – 37 per cent of which must support climate objectives. All this has lifted the mood.

Those who listened to 75 leaders along with the EU and Pope Francis outlining tougher carbon-cutting plans in a six-hour marathon can be in no doubt about intent. Co-hosts the UK – as chair of UN climate negotiations next November – refused to give a platform to countries waving vague promises. Two concerning issues remain. Australia, Saudi Arabia, Russia and Brazil were among big emitters absent; failing to meet the ambition benchmark to participate. Real progress was made but states did not do enough to put the world on track to limit warming to 1.5 degrees – the tougher of the Paris accord goals.

The bigger concern is tangible evidence that it will be increasingly difficult to rescue the planet. 2020 was marked by more record temperatures; devastating wildfires, a record Atlantic hurricane season, and accelerating melting of Arctic ice sheets. Before the summit, UN secretary general António Guterres declared the planet broken and “headed for a thundering temperature rise of 3-5 degrees this century”. That said, the annual UN “emissions gap” report concluded swift action before 2030 can ensure the 2-degree goal is met.

The first test is for governments to stop subsidising fossil fuel industry which knowingly contributed to global over-heating. Few are showing moral courage in that regard.

Nonetheless, the year has been notable for a shift by major corporations, with many aiming to become carbon-neutral years ahead of the UN target of 2050.

Ireland displayed intent by positioning itself among more ambitious countries. But the latest Climate Change Performance Index ratings show the country continues to display shameful indifference by failing to deliver emissions reductions. The Greens are in government largely because many voters want that issue addressed, along with the biodiversity crisis. They have just a few years to make progress.