SF-leaning wing of FF may get rid of Martin, while threats loom for Taoiseach 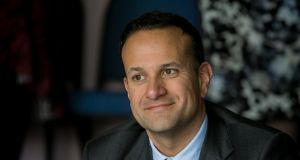 Taoiseach Leo Varadkar: party members could turn on him and back Simon Coveney as leader. Photograph: Gareth Chaney/Collins

Leo Varadkar and Micheál Martin are not just competing with each other for the Taoiseach’s office in this election campaign. They are both fighting for their political lives as the outcome will determine whether they can survive as leaders of their respective parties.

Martin took a courageous risk in Wednesday night’s televised leader’s debate by declaring that he would not go into coalition with Sinn Féin as it was a “moral question” of agreeing to share power with a party which continues to justify the murderous campaign of the Provisional IRA.

1 Coronavirus: Irish citizens advised not to travel to Italy’s affected areas
2 Divisive Leitrim rape case raises questions about future trials
3 Bank leaked my loan request to family who tried to rip me off
4 Why Sinn Féin will not call the State by its name
5 Varadkar says Sinn Féin rallies a ‘campaign of intimidation and bullying’
6 Graham Dwyer phone data appeal referred to European Court of Justice
7 Six Nations: No place to hide for Ireland’s misfiring captain
8 Maureen Dowd: For the White House parasite, all restraint has gone
9 Doctor Who landed in 1950s rural Ireland last night. The fiddles never stopped
10 Libraries: Remarkable places we should cherish
11 What evidence is there that the IRA still controls Sinn Féin?
12 Ryanair and Aer Lingus monitor impact of coronavirus on travel to Italy
13 Should you eat three meals a day – or 17 tiny ones?
14 ‘Ireland’s honeymoon period is over’ - buoyant English press reaction
15 River Shannon levels rise again after night of very heavy rain
16 Questions raised over Ireland v Italy fixture due to coronavirus
17 Spread of coronavirus triggers European travel curbs
18 ‘He was angry and punched it about nine times’: Should you recline your airplane seat?
19 A cardiac problem that could strike at any time
20 All in the Game: how Firmino’s agent made him faster . . . on his laptop
21 UK lays down red line for Brexit trade talks
22 Costa living: ‘Move home to Ireland? I’d hate it’
23 From stationary carriers to centres of excellence - five things we learned
24 Brazilian father to be deported days after daughter’s birthday
25 India hosts huge rally for Trump in world’s largest cricket stadium
26 Bank of Ireland seeks €50m more in cost savings and lowers profit target
27 Couple charged with murder of man in his Cork city home
28 Mastercard to create 1,200 new jobs by expanding base in Dublin
29 Eastern Europe faces a demographic crisis of its own making
30 Mastercard to create 1,500 Irish jobs over next five years
31 Steve Coogan: ‘Come Out, Ye Black and Tans is two fingers to the British’
32 England 24 Ireland 12: How the Irish players rated at Twickenham
33 Una Mullally: Fine Gael and Fianna Fáil must ask ‘what do we stand for?’
34 The call to relocate Dublin Port is based on faulty thinking
35 Why did the Vatican not ask any questions about abuser Jean Vanier?
36 Boris Johnson's new immigration regime will damage much more than industry
37 Sinn Féin TD describes criticism of planned rallies as ‘hysterics’
38 The Offload: Dan Tuohy pulls no punches after forced retirement
39 Liam Toland: Astute kicking game helps England establish a stranglehold
40 Anti-social chants bringing sour note to schools rugby
Real news has value SUBSCRIBE