At all times the party emphasises its united Ireland mission 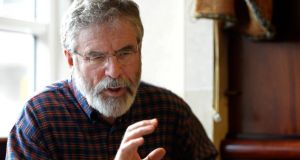 ‘The iconic status of Gerry Adams for the republican movement meant there was never a chance that party deputy leader Mary Lou McDonald would decline to back him to the hilt in the face of Maíria Cahill’s allegations regardless of the political consequences.’ Photograph: Eric Luke / The Irish Times

The performance of Sinn Féin in the forthcoming general election has the potential to dramatically alter the nature and direction of Irish politics. Delegates attending the party’s ardfheis in Derry this weekend are keenly aware that the contest offers an opportunity for a decisive breakthrough that could ultimately see them taking power in Dublin as well as Belfast.

In politics, though, nothing is certain and while opinion polls have been extremely positive for the past three years, turning that potential support into votes at a general election will be the real challenge. Just two months before the last election Sinn Féin was on 15 per cent in an Irish Times poll but won just 10 per cent on the day. During last May’s local elections it was on 20 per cent but won 15 per cent. Now with consistent poll ratings of over 20 per cent the party looks like getting somewhere between 15 per cent and 20 per cent come election day. One way or another it is set to gain a significant number of seats with an outside prospect that it could even get into government, although that appears unlikely.

The defining characteristic of Sinn Féin is that it polarises opinion like no other party. In the past this has reflected itself in an ability to repel transfers that has damaged its capacity to maximise its number of seats. This factor decided the outcome of the recent byelections in Dublin West and Dublin South West, where the Sinn Féin candidates were pipped by Trotskyists Ruth Coppinger and Paul Murphy thanks to Fine Gael transfers. The resistance to Sinn Féin, particularly among middle class voters, is sometimes portrayed as a reaction to the party’s economic policies, often dismissed by critics as “voodoo economics”.

In fact, there is nothing all that remarkable about Sinn Féin’s economic policies from the vantage point of an opposition party. Labour said many of the same things about the economy when it was in opposition, denouncing the EU institutions and holding out the notion that the country’s problems could be solved by imposing more taxes on the better-off.

A much deeper reason for the antipathy felt towards Sinn Féin by a significant segment of the electorate, particularly by older people, is the role played by the republican movement in creating mayhem and violence for a quarter of a century.

Voters who have come of age since the first IRA ceasefire in 1994 are not nearly as influenced by the events of the past. That is reflected in opinion poll findings which show the party doing extremely well among younger age groups. The contrasting attitude of different generations to the party has prompted persistent media speculation about the leadership of Gerry Adams. It is based on the notion that if he were to step down a younger leader, like Mary Lou McDonald, could make much deeper inroads into the electorate in the Republic. Such speculation misses the central point about Sinn Féin and its leader.

It is no accident that what will probably be the last party ardfheis before the next election is being held in Derry. At all times the party emphasises its united Ireland mission even if that doesn’t appear to have much traction in the Republic. Adams symbolises everything Sinn Féin stands for and it is only appropriate that he should lead the party into the next election, which is likely to take place shortly before the 1916 centenary commemorations. Those events will provide him with a huge opportunity to ramp up his united Ireland campaign and attempt to convince a new generation that the Sinn Féin vision is worth pursuing. The iconic status of Adams for the republican movement meant there was never a chance that party deputy leader Mary Lou McDonald would decline to back him to the hilt in the face of Maíria Cahill’s allegations, regardless of the political consequences.

The jostling for advantage among the anti-establishment forces has made some strange bedfellows, with Sinn Féin, the Trotskyists and Shane Ross joining forces to cheer Syriza on to victory in Greece as well as opposing almost everything the Government does at home. The turn of events in Greece since Syriza’s victory has already demonstrated the gulf between having the responsibility of power and the luxury of populist opposition. That is already shaping up as the central theme of the next election campaign.

1 Shops, hairdressers and hotels expected to reopen next week as Level 5 restrictions are eased
2 Fiona Reddan: Who’s afraid of Revolut? Not AIB and BOI it seems
3 Almost 15% of Irish adults have been raped, study finds
4 Gordon D'Arcy: I know what Joe and Cheika would do. Fix the basics
5 Kathy Sheridan: Dozens of agendas come into play when RTÉ drops its guard
Real news has value SUBSCRIBE