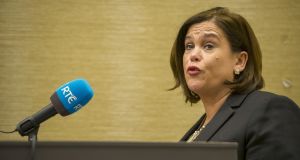 Sinn Féin leader Mary Lou McDonald. ‘The big winners this time were Sinn Féin, the party most vociferous in its attacks on all aspects of government policy.’ Photograph: Aidan Crawley/Bloomberg

The professed desire of many Fine Gael TDs, and some in Fianna Fáil as well, to go into opposition rather than government has turned the normal order of politics on its head but is an understandable response to the mood of the electorate. Attempting to hold a seat as a government TD has become a hugely difficult undertaking.

This trend has been a feature of the past three elections. In 2011, Fianna Fáil suffered the biggest reverse in Irish political history, dropping from 80 seats to 20 while the opposition parties, Fine Gael and Labour, had their best-ever results. The obvious explanation was that Fianna Fáil was held responsible for the financial crisis and nobody was prepared to give the party any credit for pulling the country back from the brink of economic disaster.

1 Coronavirus: Varadkar returns to practising medicine to help during crisis
2 Restarting Ireland: When and how will we ‘get back to normal’?
3 Donald Trump’s clown car administration has put the fear in all of us
4 Irish doctors on getting Covid-19: ‘In 90 minutes, I deteriorated quite rapidly’
5 Dublin criminal Lawlor may have been shot dead by man who owed him money
6 Robbie Lawlor profile: A feared criminal with a long list of enemies
7 Coronavirus: Plans to move 600 consultants into public system hit obstacle
8 What is Houseparty, the app everyone’s talking about – and not in a good way?
9 Infected but feeling fine: the unwitting coronavirus spreaders
10 Una Mullally: Leo Varadkar’s mask drops again
11 Tuberculosis vaccine ‘potential game-changer’ in Covid-19 fight
12 Coronavirus: Boris Johnson in hospital for tests as symptoms persist
13 How Covid-19 has changed the face of Irish shopping
14 Fewer deaths in Veneto offer clues for fight against coronavirus
15 Why everyone over 70 should cocoon during Covid-19 crisis
16 Coronavirus: Co Tyrone couple buried together after dying 20 hours apart
17 Coronavirus lockdown steps could remain into winter, says expert
18 FG, FF set to agree principles to form new government
19 An ‘Asian flu’ pandemic closed 17 Dublin schools in 1957
20 Man arrested after reportedly threatening staff in Dublin shop
21 Netflix has revealed its most-watched content. You might be surprised
22 Mary Lou McDonald: This crisis shows that Sinn Féin was right
23 Ireland has struggled to protect nursing homes from Covid-19
24 Coronavirus: Number of Irish cases nears 5,000 as 21 further deaths confirmed
25 Five men charged after garda car attacked at Traveller halting site in Cork
26 Man City to investigate Kyle Walker over lockdown sex party
27 Make a move to Irishtown – the affordable side of Dublin 4
28 Acclaimed Connemara writer Tim Robinson dies at 85 from coronavirus
29 Coronavirus and children: The red flag symptoms to watch for
30 Taking out the bins and hanging up the laundry have suddenly become thrilling activities
31 Coronavirus: Social distancing on the beach as people ‘get the message’
32 Coronavirus anxiety keeping you awake? Here's how to get more sleep
33 Meet the Varadkars: ‘Handsome, beautiful 38-year-old doctor becomes PM of Ireland’
34 Conor Wilmot ‘found something on the internet that went wrong’
35 Irish woman in Sweden: No lockdown, little distancing, people still shaking hands
36 Half of Dublin’s Catholic priests cocooned due to Covid-19 measures
37 Dublin deserted: Coronavirus turns city into ghost town
38 Chris Johns: A shopping list for the post-Covid-19 world
39 Fintan O’Toole on Tim Robinson: ‘One of the greatest writers of lands’
40 David McWilliams: We must loosen up on financing pandemic spending now
Real news has value SUBSCRIBE