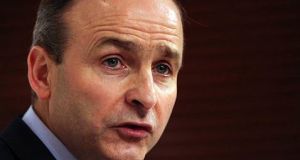 Micheál Martin: his preference after the next election would probably be for a coalition involving Fianna Fáil, the Labour Party and a number of Independents

Fianna Fáil leader Micheál Martin has staked his political future on a pledge not to enter coalition with Sinn Féin after the next election. His courageous stance could cost him the taoiseach’s office, but he is on solid ground in believing he is acting in the long-term interests of his party and the country.

Martin’s renewal of his commitment to eschew coalition with Sinn Féin in any circumstances was one of the few clear commitments to emerge from the political party think-ins that preceded the return of the Dáil from its summer break.

1 Prepare for six to nine months of Covid-19 restraints, warn health officials
2 Speed and distance of Covid-19 droplets tracked by Mater researchers
3 Sean Quinn stunned at rebranding of Quinn Industrial Holdings
4 Róisín Ingle: How to eat out in a pandemic. Don’t do what I did
5 Probate is changing: What does that mean for you?
6 Covid-19: Seventy cases in Cork traced to local pubs and restaurants in recent weeks
7 Fintan O’Toole: My father wanted to die and I promised to help him
8 Graham Norton: ‘I wanted out, out, out of Ireland’
9 ‘Therapy completely changed my life, once I gave it my all’
10 Gerry Thornley: South African sides would be a welcome addition to Pro14
11 No joy for consumer with a faulty Husqvana chainsaw
12 Will tracker mortgage be at risk if Ulster Bank closes?
13 Do headstands, clear out a junk drawer, have sex: 15 ways to re-energise your day
14 Olivia O’Leary: If you move to Carlow, there are things you’ll have to get used to
15 Government own goals are gifting the initiative to Sinn Féin
16 Irish golf tourism faces ‘wipeout’ unless Covid travel restrictions eased
17 Three Ireland switches on 5G network around the country
18 Great outdoors: Meet the teachers taking lessons beyond the classroom
19 Susie Dent: ‘Jimmy Carr is incredibly rude to me. I took it as a compliment’
20 Swedish newspaper eyes best financial result this century
21 More than 30 people queue overnight to secure property in Carlow
22 Covid-19 upheaval points way to solving persistent inequality
23 Schools fear losing teachers due to Covid-linked pupil absences
24 ‘I never suspected that, aged 29, I’d be lost’
25 Donald Trump's taxes: US president paid $750 federal income tax the year he won the election
26 Almost a third of Garda firearm discharges found to be accidental
27 Hello Eir, is anybody there? Four unhappy customers complain
28 Rolls Royce Ghost: More than just a plaything for the rich and shameless
29 Ireland’s travel green list reduces to four countries
30 1,000,000 coronavirus deaths: global toll passes ‘agonising milestone’
31 Me & My Money: ‘Money can’t buy you happiness but it can make life a lot easier’
32 The Secret Teacher: My students’ capacity to socially distance is worryingly low
33 Ireland must prepare for further Covid waves - HSE chief
34 Dublin Aerospace takes over Flybe’s aircraft servicing base at Exeter Airport
35 Irishwoman Adrienne Gormley joins N26 as chief operating officer
36 Covid-19: Possible extra restrictions for four counties to be decided by weekend
37 Ken Early: Handball ‘crisis’ a timely distraction from the grim bigger picture
38 Missing your grandchildren during lockdown: ‘The pain is physical’
39 Liverpool maintain perfect start with win over Arsenal
40 Nurse who falsified prescriptions is struck off register by High Court
Real news has value SUBSCRIBE