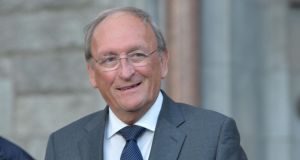 ‘Both the Ceann Comhairle Sean Barrett (above) and Taoiseach Enda Kenny resisted an attempt by the former Minister for Justice Alan Shatter to halt the inquiry in its tracks but Fianna Fáil and Sinn Féin went apoplectic about the fact that a debate was disallowed on legal advice.’ Photograph: Alan Betson / The Irish Times

The nasty abuse directed at President Higgins by anti-water charge protesters and some silly Opposition antics in the Dáil may have generated headlines during the week but they couldn’t quite mask the flow of good news on the economy.

Since the Dáil resumed, TDs in both Coalition parties have been buoyed up for the next election by the prospect of positive economic developments this year.

The mistakes and poor political judgment that characterised the Government’s performance last year have been minimised so far in 2015. If anything, it seems to be the Opposition’s turn to stumble into unforced errors.

The venomous taunting of the President by a handful of anti-water charge protesters may have done more to undermine their campaign than the decision of the Government to cut the charges late last year.

Displaying their behaviour on YouTube for all to see gave the public an insight into the nature of the movement and vividly displayed the kind of abuse the unfortunate Irish Water workers and the gardaí have to put up with on a regular basis.

It will be interesting to see if the turnout at the latest round of water protests today suffers as a result.

Trotskyite TD Paul Murphy, who didn’t have any problem about stoking up hostility to Joan Burton before Christmas, was indignant when a headline gave the impression that he supported the insulting comments as distinct from supporting the right to protest.

Murphy was critical of the President, saying people had been given the illusion that he would not sign the water charges into law or would delay the legislation by calling the Council of State. “This belief was fed by political statements which the President often makes which are critical of austerity measures,” said the TD.

To be fair to Murphy, the President has made a series of speeches in effect taking issue with the thrust of Government economic policy as well as the EU response to the financial crisis. So far they have been ignored, as a constitutional crisis is the last thing the Coalition needs, but the potential for a breach is there.

In the Dáil during the week, the flashpoint was a row over the fact that a debate was not allowed on the Government’s decision to set up a Commission of Inquiry into the Cavan-Monaghan division of the Garda following the allegations made by Sgt Maurice McCabe.

The decision to rule out a debate was made by Ceann Comhairle Seán Barrett on the grounds that it could be regarded as an interference with High Court proceedings being taken by former minister Alan Shatter challenging the Guerin report that prompted the establishment of the inquiry.

Both the Ceann Comhairle and Taoiseach Enda Kenny resisted an attempt by the former minister to halt the inquiry in its tracks but Fianna Fáil and Sinn Féin went apoplectic about the fact that a debate was disallowed on legal advice.

There was glee among Fine Gael TDs who see themselves locked in a battle with Fianna Fáil for the middle ground at the next election. “I’m sure the pictures of Gerry and Micheál standing together will feature in our election literature when the time comes,” said one Fine Gael TD.

Fianna Fáil and Sinn Féin were also united in their outright opposition to any move by the Government to sell the State’s 25.1 per cent share in Aer Lingus and are clearly lining up to paint the Coalition has being unpatriotic if a share sale goes ahead.

This would be rich coming from Fianna Fáil, which privatised the airline in the first place, but in fact all the signs are that the Coalition has no intention of selling the State’s share.

A number of Labour and some Fine Gael TDs would find it very difficult to back the measure in the Dáil. The last thing the Coalition needs is a distracting row that would tie it down in months of controversy and political infighting.

Minister for Transport Paschal Donohoe has handled the issue deftly up to now, talking about jobs and connectivity rather than stock market valuations, which would be gobbledegook to most voters.

The exchequer would gain about €300 million from a sale and while that might have been irresistible when the State was broke a few years ago, there is no longer a financial imperative to sell.

The view of an expert like Carney, that “Ireland has made tremendous progress”, was naturally welcome to the ears of the Government, which launched its 2015 Action Plan for Jobs. The annual plan, driven by Minister for Jobs Richard Bruton, has been one of the outstanding success stories of the Coalition’s term.

Its electoral fate will be determined by whether it can persuade the public to give it credit for that achievement.

See irishtimes.com/newsletters for The Irish Times Inside Politics newsletter

1 David McWilliams: ‘Ireland is three decisions away from being a perfect country’
2 Mandatory quarantine and flight cancellations unlikely despite rise in cases
3 Two in custody after Ryanair flight to Dublin forced to divert
4 My aunt never told us that Gran passed away with no will
5 Game Changers: Gary O’Toole took a stand when others turned their heads
Real news has value SUBSCRIBE