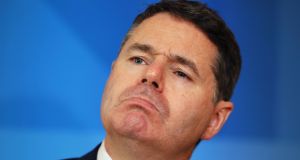 Minister for Finance Paschal Donohoe: almost every lobby group and NGO in the country called for spending increases in Budget 2020. Photograph: Brian Lawless/PA

The one silver lining from Brexit is that it gave Paschal Donohoe the opportunity to bring in a sensible budget. It provided the Minister for Finance with a cast-iron excuse to resist the chorus of demands for extra spending from every vested interest group in the country, political opponents and, most crucially of all, his own Cabinet colleagues.

Following the strictures of the Fiscal Advisory Council and the Central Bank about the dangers of going back down the road that brought the country to the brink of financial ruin just a decade ago, the Minister needed to put a tight lid on spending. He also had to resist demands from Fine Gael colleagues, including Taoiseach Leo Varadkar, to reduce tax on hard-pressed middle-income earners in what will almost certainly be an election year.

1 Fintan O’Toole: The terms of Brexit hold a great irony
2 Gardaí awaiting further toxicology test results on McGinley children
3 Why are Fine Gael and Fianna Fáil refusing to go into coalition with Sinn Féin?
4 Judge dismisses Kobe Bryant rape case
5 Wooing the electorate – sometimes it’s best to just listen
6 Dancing with the Stars 2020: Everything you need to know
7 Brexit is a collective English mental breakdown
8 Gonzaga shock Blackrock for historic Leinster Senior Cup win
9 A Ryan Tubridy interview takes a terrifying twist
10 Man (33) killed in suspected stabbing in Co Wexford is named
11 Des Bishop: ‘The last time my mother spoke was to say sorry’
12 ‘It’s survival of the fittest’: Dublin Cycling Campaign urges safety measures
13 I'm up for sex the whole time, but my husband sees it as not putting in any effort
14 Renters on housing crisis: ‘We’re f**ked basically’
15 Kobe Bryant dies in LA helicopter crash - reports
16 Saudi wealth fund close to buying Newcastle United in €400m deal
17 Returning from Australia, I barely recognise my hometown
18 Fintan O’Toole: Historians will not believe sheer ignorance of Brexit supporters
19 Ireland’s housing crisis in five revealing graphs
20 Restore State pension age to 65 to end ‘daylight robbery,’ says PBP
21 My teenager can’t bear the sound of us chewing at dinner
22 Volvo warns of scaled back car line-up if UK splits from EU rules
23 Dublin house deaths: Three young children named
24 NI house builder apologises to Harry and Meghan over adverts
25 Shrewsbury are heading for Anfield after fairtytale FA Cup comeback
26 David McWilliams: A fall in house prices should be our goal
27 Some get up early to go to the gym, others because they slept in a doorway
28 Cameron Blair remembered as ‘loyal friend, protective brother, beautiful boy’ at funeral
29 Corey Taylor: After 20 years in Slipknot we are all beat up
30 Sinn Féin demands for action on unity the big coalition stumbling block
31 Why helicopters crash: fuel, pilot error and mechanical failure
32 Perfect chicken schnitzel: it’s all in the breadcrumbs
33 Jeanine Cummins: ‘I didn’t know if I had the right to tell the story’
34 Opioid executive admits to ‘no morals’ ahead of prison term
35 Housing crisis: What the rest of the world can teach Ireland
36 Community in shock after three children die: ‘It is just horrific’
37 The affordable housing scheme changed my life
38 David Clifford sends everyone back to their corners unbeaten
39 Cliff Taylor: Brexit did, after all, mean Brexit
40 Top marks for an unpretentious new Dublin wine bar with delicious food
Real news has value SUBSCRIBE