State must step up its capacity to deliver climate action 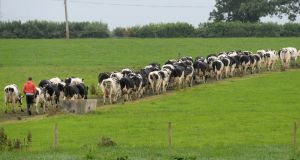 There is no compelling reason to give Ireland’s agricultural emissions a free pass. The brutal maths mean all sectors need to reach net zero greenhouse gas emissions within a generation. Photograph: Alan Betson

Climate change is front and centre in European politics. On Wednesday, the European Commission published its European Green Deal package, identifying climate change as “this generation’s defining task”. European leaders met in Brussels to discuss the climate crisis, while negotiators are huddled in Madrid for the annual UN climate conference.

All of this shines a renewed spotlight on Ireland’s response to climate change. Work is progressing on revising Ireland’s 2015 climate change law and the broad outlines of these revisions were set out in the Government’s Climate Action Plan published in June. But important questions remain unanswered.

One question concerns what Ireland’s long-term climate change target should be. Speaking this week at the UN climate conference in Madrid, Minister for Climate Action and Environment Richard Bruton committed to “a trajectory to be net-zero emissions by 2050”.

By contrast, Taoiseach Leo Varadkar suggested recently that Ireland’s greenhouse gas emissions from agriculture could be subject to a less onerous target on the basis that agriculture is different. This argument is largely spurious.

As Prof Peter Thorne of Maynooth University and colleagues have argued, there is no compelling reason to give Ireland’s agricultural emissions a free pass. All countries have special circumstances, but the brutal maths of climate change mean that all need to reach net zero greenhouse gas emissions within roughly a generation.

A related question is the date by which Ireland should commit to a net zero greenhouse gas emissions goal. The time horizon set out in the Climate Action Plan is 2050. There is a strong argument for relatively wealthy countries such as Ireland striving to meet this target earlier. Sweden has committed to net zero by 2045, for example. Finland has set a date of 2035.

The year 2050 may seem like a long way off, but in climate policy terms it is coming clearly into view. Our greenhouse gas emissions are driven significantly by infrastructure decisions that lock us in to either high- or low-carbon patterns of development. The decisions we make on infrastructure and investment over the next decade will largely determine whether we have any hope of meeting our longer-term climate targets.

The longer we postpone necessary climate action, the more expensive the transition will be. We cannot keep kicking the can down the road, hoping that our future selves will save us.

Ireland’s 2015 climate law did not set either medium- or long-term climate targets, or put in place a mechanism for setting targets. The result was that there was essentially no benchmark against which to measure progress.

Following broadly the model of the landmark 2008 UK Climate Change Act, the Government’s Climate Action Plan commits to providing for a system of five-year “carbon budgets” as part of a strengthened climate law. Not to be confused with financial budgets, carbon budgets set an overall limit on emissions for a set period of time.

The first three (2021-25, 2026-30 and 2031-35) will be set in the coming year. A strengthened Climate Action Council, a successor to the existing Climate Change Advisory Council, will be tasked with providing advice to government on the setting of these carbon budgets, among other tasks.

Government will be required to “comply or explain” with this advice. This means that government is perfectly within its rights to pursue an alternative path, but in that case it must provide a written explanation to the Houses of the Oireachtas. The Houses of the Oireachtas in turn are required to approve the government’s proposed carbon budgets, and must, if rejecting the government’s proposal, propose an alternative.

This is not “government by experts” or a Climate Action Council with “teeth”, as some would wish. Rather, it strikes an appropriate balance between science-based policymaking and democratic accountability.

This strengthening of Ireland’s climate law is welcome, but a number of questions remain. First, how to deal with changing circumstances? The Climate Action Plan acknowledges the need for flexibility, but this could be a backdoor to watering down commitments. The revised climate law could deal with this concern by providing for upward-only review and strengthening of targets.

Second, what kinds of expertise should be drawn upon to inform climate policymaking? The existing Climate Change Advisory Council is composed almost exclusively of economists and engineers, and is mostly male. While these perspectives undoubtedly have an important contribution to make, a wider diversity of perspectives is surely needed. In contrast to the recommendations of the Joint Oireachtas Committee on Climate Action published in March, the Government’s Climate Action Plan was silent on this issue.

The most obvious argument in favour of carbon budgets is that they provide a roadmap for government and a yardstick against which the Government’s progress can be measured. In this context, the capacity of government to respond needs to be significantly stepped up.

The policy delivery framework set out in the Climate Action Plan is very welcome, particularly the strengthened role of the Department of the Taoiseach. But the capacity of the State to deliver climate action needs to be significantly stepped up, including through increased resources and personnel.

Carbon budgets also serve a broader purpose. Set in advance and under legislative procedures that make them hard to unpick, carbon budgets are what public policy analysts call “commitment devices”. They provide a clear and unambiguous signal to stakeholders and society at large of the direction of travel, and that this pathway will not be altered come the next election or the next recession.

This matters because climate action is about more than just what government does or does not do. The role of government has evolved from top-down planner to enabler of society-wide innovation and transformation. Business, communities and individuals must be part of this transformation.

In order to enable this transformation, government must provide direction, but it must also include citizens and stakeholders in shaping our shared low carbon and climate resilient future. It must also be socially just. Without these critical components at the centre, the Government’s much-lauded Climate Action Plan will remain just that – a plan.