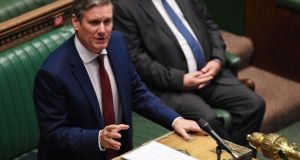 Labour leader Keir Starmer. The Labour Party has launched an education initiative for its 500,000 members on the Belfast Agreement. Photograph: Jessica Taylor/UK Parliament/AFP via Getty Images

Yesterday the Telegraph made a curious argument for Britain’s future with the Biden administration. Because Joe Biden’s ancestor fled to the United States from Mayo during the famine, it could mean the 46th US president is “well disposed towards Great Britain”. Without wishing to be glib, the famine was likely not the PR coup for Britain some seem to think it is.

But what is one throwaway comment? There are plenty of good cases to be made about Biden’s good future relations with Britain. And the counterargument – that Biden will be bad for Britain simply because he is invested in Ireland – is a facile one. That the famine would have any bearing of Anglo-American policy is a ludicrous notion.

6 We said: ‘This is life and death, and we owe the Irish people’

7 NTMA to seek answers from Davy after ‘very serious’ reprimand

8 Gordon Elliot should take break to ‘get life back in order’, says Ted Walsh

9 Home office, home bar and scope for another home alongside for €1.55m

11 ‘My husband is unemployed. Where will he go if I leave him for my business partner?’

20 Three arrested as gardaí break up street party in Limerick

22 Rupert Murdoch at 90: Fox, succession and ‘one more big play’

23 Michael Harding: ‘Thank you for your love,’ I wrote to a friend. Then I tore it up

27 Bill Gates: ‘I’m not trying to take anything away from Greta Thunberg, but...’

29 Summer tourist season at risk with Covid passports months away

30 Róisín Ingle: I told my children about my new handsome friend. They accused me of cheating

31 Irish in Australia: ‘It’s scary here, not able to visit home at the drop of a hat’

36 Long Covid in children: New data is cause for concern, scientists say