Solidarity and friendship – An Irishman’s Diary on Krzysztof Józef Romanowski 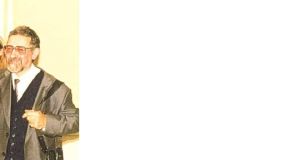 I met Krzysztof Józef Romanowski for the first time when I went to a travel agent in Dublin to arrange a holiday in November 1981. As I entered the agent’s premises he was in deep conversation with another person. On noticing me, the proprietor, who was from Poland, formally introduced me to his friend, Mr Romanowski. After a few pleasantries Józef, as I later knew him, bowed in an old-fashioned manner and left.

The travel agent told me he could offer me a two-week trip to Poland and added that if I was interested I could do a great service for his friend who had just left. While a staff member of Poland’s Radio and Television organisation, Józef travelled to Ireland to cover Pope John Paul II’s visit in September–October 1979. Owing to his support for Solidarity, he was banned by the communist regime from returning to his homeland. His wife Maria then attempted to join him in Ireland. But after the outlawing of Solidarity, of which she was a supporter, she was prevented from leaving her country. As part of this preventative action, documents required to facilitate her departure from Poland and entry into Ireland, when sent by post or courier, were intercepted and never reached her. The travel agent asked me if I was prepared to deliver them to her.

Willing to help and curious to see what Poland under communism was like, I agreed and decided to spend the first fortnight of December in Poland. When my aircraft taxied to a halt in Warsaw airport it was four in the afternoon and already dark.

Feeling very much alone, I could see where there was lighting that there had been a heavy fall of snow. The central hotel I was booked into for a few days appeared to be almost empty. For a few days I ventured out only to meet the priests and celebrate Mass in a nearby church.

Then as arranged I met Józef’s daughter Maria in the gloom at the back of the dimly-lit, shabby cathedral in Warsaw. Sixteen years old and looking a lot younger, she spoke good English and gave me my instructions. I was to travel by train to the main station in Krakow where I would be met.

In the event the person who met me was from a major seminary. I was given a single room there which was quite a luxury, as about a hundred students were accommodated in every available space in the residence. The daily routine was no different from what I experienced in the major seminaries at Clonliffe and Maynooth which I had attended before ordination. The diet, however, was different. The daily menu was bread and margarine, potatoes and vegetables and coffee.

The student accompanied me on a number of trips, most notably to the popular pilgrimage centre at the Shrine of Our Lady the Black Madonna of Czestochowa. On a visit to Auschwitz I had the most depressing experience of my life as we trudged through the snow in the intense cold and viewed the seemingly endless rows of prison huts, the gas-chambers and the piles of clothes, shoes, spectacles and false-teeth taken from those murdered in that awful place.

I delivered the travel documents and visas to Maria who lived in a huge block of apartments where the official surveillance on the block was quite obvious. Her apartment was tiny but far warmer than the room I occupied in the seminary. My holiday ended and I boarded a flight on December 14th out of Warsaw just a day after Gen Wojciech Jaruzelski, the Polish leader, imposed martial law across the country to crush Solidarity. Two months later – in February 1982 – Maria succeeded in joining Józef in Ireland where they were both employed by a firm producing animation films.

I accompanied Józef and Maria back to Poland when for a second time Pope John Paul II visited his homeland in 1983. His major address at Warsaw was an awesome occasion. More than one million of his fellow countrymen and women heard the pope urge them to “fear not” as he made one of the seminal speeches of the 20th century that heralded the collapse of communism.

Józef and Maria had been active members of the Polish branch of P.E.N., the international organisation which champions freedom of speech and freedom of expression. I was then chairman of Irish P.E.N. and at my invitation they joined me on the executive committee.

In his later years Józef was the Irish correspondent for Radio Maria in Poland. After a short stay in the hospice in Blackrock he died on September 18th, 2006. I had the privilege of concelebrating his Requiem Mass. And I continue to meet and to enjoy the friendship of members of his extended family.

1 A letter to Ireland from Italy: this is what we know about your future
2 No April Fool jokes please, we are not in the mood
3 Tempers fray as coronavirus lockdown fatigue hits Italy and Spain
4 Coronavirus: New powers for gardaí expected to come into force
5 Miriam Lord: Vigilant Richard Boyd Barrett keeps the Hungary at bay
Real news has value SUBSCRIBE