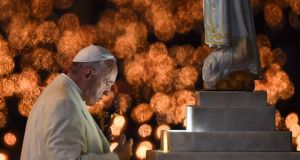 Moral teaching: the media downplays Pope Francis’s teachings on the inviolability of all human life at all stages. Photograph: Patrícia de Melo Moreira/AFP/Getty

So, for example, in our own times it is almost only some Catholics who are capable of understanding and applying in practice the implications of the notion of the inviolability of all human life.

The Catholic Church is at this stage well nigh alone in defending the inviolability of all human life at all stages. This aspect of Pope Francis’s teaching is downplayed by the media.

Benedict XVI pleaded for a revival of trust in the capacity of human reason to put us in touch with truth, pointing out the violent repercussions of failing to do so

In an era of post-truth that denigrates rational discourse, the Catholic Church is the greatest defender of truth and reason. In his address at the University of Regensburg, in Germany, in 2006, Benedict XVI pleaded for a revival of trust in the capacity of human reason to put us in touch with truth, pointing out the violent repercussions of failing to do so. This prophetic plea has been largely ignored.

No doubt the banishment of reason and truth, on the one hand, and the welcome of sentimentalism and post-truth, on the other hand, are essential characteristics of the culture of death that John Paul II saw unfolding before his eyes. Unfortunately, it has become increasingly difficult for the morally attuned to guard against the pervasive influence of this culture.

The decision of the representatives of the Sisters of Charity to have no involvement in the new National Maternity Hospital is a case in point. (I would be surprised, however, if all members of the congregation are in agreement.)

An Irish Times editorial expresses the situation euphemistically: the order’s decision “should allay fears that medical procedures allowed by law would not be carried out in the new NMH at St Vincent’s where these may be in conflict with the teachings of the Catholic Church”. In other words the possibility of conscientious objection to the taking of life in the womb is no longer an issue.

Let us reflect on the nature of the act that the congregation’s representatives propose with the best of intentions and in difficult circumstances. No doubt the congregation’s representatives intend that the inviolable dignity of all expectant mothers and their children be respected without exception. They no doubt intend that their life-affirming ethos be continued into the future.

The act proposed, however, is the placement of property in a legal and medical context in which abortion is permissible, bearing in mind that abortion is the direct taking of innocent human life in the womb. (The indirect, unintended loss of life in the womb does not count as abortion.) In this context medical professionals may well feel coerced to participate in unethical practice to protect themselves against litigation.

The wider circumstantial context is one in which voices are being raised in support of repealing the Eighth Amendment to the Irish Constitution, which protects life in the womb. It is an emotive context that undermines right practical reason.

More immediately, the sisters have been subjected to much distasteful commentary. Sr Stanislaus Kennedy compared this commentary to elder abuse. This dynamic does not facilitate objective decisionmaking.

If or when an unethical procedure is executed at the National Maternity Hospital no one involved in the congregation’s decision will be able to claim that it was unforeseeable. The legal context is so constituted as to be ordered to this eventuality.

This is not the assertion of one endowed with unrivalled moral wisdom and who can therefore accurately predict future contingent events. We are talking about a state of affairs the direction of whose unfolding is clear to anyone who possesses some degree of moral common sense.

Reason informed by the Gospel of Life calls the sisters’ representatives to display courage by withdrawing from any deal that is ordered to the destruction of innocent life. Experience of the Cross will be the sisters’ reward in this life. We ought never to forget, however, that in the Cross is our salvation.

Fr Kevin E O’Reilly, OP, is a philosopher and theologian who teaches moral theology at Angelicum University, in Rome