Sinn Féin’s problem with names much more than mere wordplay

Michael McDowell: Loyalty to the State a duty of every citizen – and by extension members of the government 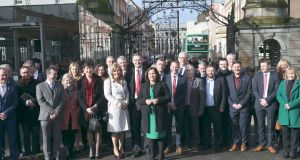 Election to Dáil Éireann entails a rejection of the notion that the army council was, or is, the legitimate successor to the Irish Republic. Clarity that such a rejection is now part of Sinn Féin’s claim to be part of the government would be a small step towards determining where their loyalties as citizens and would-be ministers really lie. Photograph: Collins Photos

In recent times articles have been written concerning the attitude of the Sinn Féin to the legitimacy of the Irish State and its institutions. Most feature the claim by Michael Doyle – the election agent of Waterford TD David Cullinane - that “we broke the bastards. We broke the Free State” in a video of a post-election celebration.

If all that were in issue was the language used by some in Northern Ireland (and some of their supporters in this State) to describe the State established by the 1937 Constitution, it would be easy, and perhaps best, to dismiss such labels as nothing worse than political idiom.

However, the use of such language by the Provisional movement is more significant than mere idiom or slang.

Such use is part of an ideology that denies the legitimacy of the Irish State.

Every person who became a member of the IRA was obliged, on induction, to accept that the only legitimate body entitled to exercise the powers of the Irish Republic was the army council of the IRA.

The IRA itself claimed, and still claims, that its army council was given the legitimate authority of the Irish Republic in a strange and slightly ridiculous transfer of power by six surviving members of the executive of the second Dáil in 1938.

These die-hard rejectionists claimed that neither the Irish Free State nor the Irish State established in 1937 were legitimate.

Both states, they claimed, and still claim, were illegal usurpations of the Irish Republic proclaimed in 1916 and declared by Dáil Éireann in 1919 to be an independent sovereign State.

This ideology famously permitted every atrocity committed by the Provisional IRA to be described as “non-criminal” provided that it was authorised by the IRA’s army council.

The Irish Constitution provides at Article 9.2 that “loyalty to the State” is a fundamental political duty of all citizens.

The Constitution provides at Articles 12, 16 and 18 that membership of the Oireachtas, whether as president, TD, or senator, is confined to citizens of the Irish State.

It follows that those who, in their capacity as citizens of Ireland, seek election to the Oireachtas do so on foot of a fundamental duty of loyalty to the Irish State and its institutions. Historians are aware that the 1916 Proclamation included an entirely new word “Poblacht” to denote the term republic in Irish.

In February 1919, however, Dáil Éireann, composed of the victors of the 1918 general election, ratified the 1916 Republic and declared its independence in a solemn declaration of independence promulgated in three languages, Irish, English and French.

In the Irish version of the Declaration of Independence, the Sinn Féin members of Dáil Éireann chose to describe the Irish Republic as “Saorstát Éireann”.

And when a majority in Dáil Éireann in 1921 voted to ratify the Treaty, the name of the independent Irish State (albeit a State within the Commonwealth having the same status as Canada) was Saorstát Éireann.

Michael Collins, one of the architects of the Treaty, recognised that the freedom of SaorStát Éireann was not the perfect freedom for which the Dáil and its army had fought, but amounted to “the freedom to achieve a perfect freedom”.

The constitution drafted by Collins was as republican as he could make it within those parameters. Saorstát Éireann had its own written constitution which asserted popular sovereignty and the Irish State thereby created had the Tricolour as its flag, the power to conduct its own international relations and to maintain its own defence forces and to exercise full powers of government.

Election to Dáil Éireann necessarily entails a rejection of the notion or claim that the army council was, or is, the legitimate successor to the organs of the Irish Republic

The 1937 Constitution followed De Valera’s transformation of the Free State constitution by removing the oath and the office of governor general.

The terms of the Belfast Agreement approved by the Irish people in separate referendums North and South, accept the existence of two jurisdictions on the island and assert that the right of the Irish nation to choose its own form of government and to bring about a united Ireland can be “brought about only by peaceful means with the consent of the majority of the people, democratically expressed, in both jurisdictions in the island”.

Because Ireland is, and is declared by Article 5 of the Constitution to be a “sovereign, independent, democratic State”, it necessarily follows that its citizens, who owe it a fundamental duty of loyalty, must accept its legitimacy and cannot describe it merely as “a southern state” or the “Free State”.

Members of Dáil Éireann cannot have it both ways in respect of loyalty to the State. Election to Dáil Éireann necessarily entails a rejection of the notion or claim that the army council was, or is, the legitimate successor to the organs of the Irish Republic.

Clarity that such a rejection is now part of Sinn Féin’s claim to be part of the government of Ireland would be a small step towards determining where their loyalties as citizens and would-be ministers really lie.

1 Coronavirus: 25 more people die in the State as new Garda powers come into force
2 Coronavirus: More ‘striking’ evidence BCG vaccine might protect against Covid-19
3 Coronavirus Q&A: What new powers have the gardaí been given?
4 Sligo woman jailed for 28 days over coughing in garda’s face
5 Lockdown exit: How can Irish economy reopen without big health risks?
Real news has value SUBSCRIBE