Sinn Féin: Our plan to persuade unionists to support a united Ireland

Being part of new, reimagined and outward-looking Ireland will prove ever more attractive in time ahead 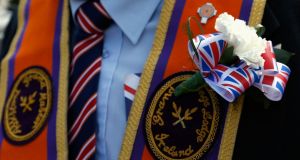 The British cultural identity of many people in the North can and must be accommodated and given expression in any united Ireland. This may involve wide-ranging constitutional change. Photograph: Russell Cheyne/Reuters

Among the excellent presentations was a thought-provoking contribution from Belfast political commentator Alex Kane.

A former director of communications for the Ulster Unionist Party Kane is in his own words “an unashamed, unambiguous, unembarrassed unionist”.

Kane wasn’t in the business of providing comfort to the Dublin audience and made the case that, in spite of mounting evidence of the economic benefits of unity, most unionists would vote against it on the basis of identity. Only 15 per cent to 20 per cent of unionists, Kane feels, are open to persuasion.

That people would vote against their own economic interests is hardly a novel revelation, but the issue of identity is one that those advocating a united Ireland must address.

The North has been transformed in recent years. No longer an Orange state, all the old certainties of unionist political establishment are gone.

The recent Assembly election delivered seismic change. The idea of a perpetual unionist majority in the North is now also gone.

Meanwhile, Brexit has changed everything. The prospect of the North being dragged out of the European Union against the democratically expressed wishes of people there, has horrified citizens across the political spectrum and turns on its head the “principle of consent”.

The main unionist party, the DUP, is out of step with people from both communities, not just on Brexit, but on a range of issues, including marriage equality, a Bill of Rights and an Irish Language Act. This is particularly true of younger voters.

Being part of a new, reimagined and outward-looking Ireland will prove ever more attractive to people from all backgrounds in the North in the time ahead.

Political positioning, based solely on opposition to Irish unity, is unsustainable.

People in Belfast, Derry or Fermanagh need answers to everyday social and economic problems. As the North changes, wrapping everything in the union flag will prove an increasingly threadbare political policy.

There now exists a potential for a progressive consensus among Sinn Féin, the SDLP, Alliance, the Greens, People before Profit, and individual MLAs.

Laying out a vision of what a united Ireland might look like is crucial in allaying fears among unionists of reverse discrimination or cultural marginalisation in a united Ireland.

If Kane is correct, and unionist opposition to reunification boils down to the issue of national identity, let’s talk about that.

The British cultural identity of many people in the North can and must be accommodated and given expression in any united Ireland. This may involve wide-ranging constitutional change.

For a start, we cannot have an inclusive, united Ireland while one church maintains undue influence over education or health services.

We may have to look at new symbols and emblems to reflect a new, inclusive, agreed Ireland.

Those who wish to see a united Ireland need to be open to transitional arrangements, including continued devolution to Belfast within an all-Ireland structure.

Another challenge thrown down by Kane was to Southern political parties. He wanted to know the position of Fine Gael and Fianna Fáil on Irish unity.

This was echoed by Kevin Meagher, former adviser to a secretary of state for Northern Ireland, who said parties, other than Sinn Féin, must plan for Irish unity.

Sinn Féin has published detailed ideas to stimulate debate on the issue in our Towards a united Ireland discussion document. Other parties, who claim to support unity must do the same.

Fianna Fáil declined an invite to address our January conference on the basis that such debate was premature.

So, it is welcome that seven weeks later Mícheál Martin said that his party is to develop proposals for a united Ireland.

In the changed circumstances we are witnessing, it is imperative that the Government too prepares a plan for unity.

One step would be an Oireachtas all-party group to bring forward a Green Paper on the issue.

Plans should be developed for an all-island national health service and all-island public services through a “United Ireland Investment and Prosperity Plan”.

The New Ireland Forum created a space for discussion on constitutional options for change and developed an Economic Options Paper on the Cost of Partition.

The forum failed because it excluded Sinn Féin and operated at a time of a British veto on constitutional change. Not only is the British veto now gone, but the world has changed hugely since 1984.

Brexit, the prospect of Scottish independence and the recent Northern election are harbingers of further change, challenges and opportunities.

It is time for all political parties, the media and citizens to engage realistically with planning for Irish unity.

1 Blanchardstown, Tallaght top table for highest Covid-19 rates
2 The far right rises: Its growth as a political force in Ireland
3 Mike Murphy: ‘I won’t do another over-70s lockdown’
4 Prof Sam McConkey: This is the beginning of the second Covid-19 wave in Ireland
5 Coronavirus: Public health experts considered idea of moving Dublin to Level 4
Real news has value SUBSCRIBE