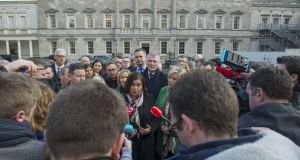 Sinn Féin feels it left seats behind by not fielding more candidates in this election. It has certainly changed Irish politics, at least interrupting the domination of the two civil war parties.

With only one Sinn Féin candidate in most constituencies there was little risk of vote-splitting. The party topped the poll in two-thirds of the constituencies, giving it a moral authority far beyond the 37 of 160 seats it has secured in the Dáil, or indeed its quarter-share of first-preference votes.

A range of parties and candidates will be grateful for the transfers of Sinn Féin votes surplus to quota, and Sinn Féin has been given a very clear view of the appetites of its supporters. The pattern of transfers from solo Sinn Féin candidates achieving their quota before other parties in their constituency is particularly interesting.

These are the cases where second choices for any other candidate would yet count (none having been eliminated or having already achieved quota) and where second choices could only be given to other parties. On this evidence, Sinn Féin is a home for voters who lean left. Everywhere, it is a party selected by people disproportionately dissatisfied with Fine Gael.

Of the 993,405 votes cast here, 276,711 were for the single Sinn Féin candidate running. From these, 88,350 were surplus to quota and were thus re-allocated on the basis of the pattern of second choices of Sinn Féin voters.

In these 18 constituencies, Fine Gael received 25.5 per cent of all first-preference votes for candidates other than Sinn Féin. Its share of Sinn Féin transfers was 4.5 per cent.

They were about nine-tenths as likely as their neighbours to favour Labour when given the choice between parties other than Sinn Féin, and 1.9 times as likely to favour the Social Democrats.

These Sinn Féin transfers elevated the Left vote. While they raised the Fine Gael total by only 1.8 per cent after Sinn Féin transfers were added to first preferences, and Fianna Fáil’s by 3.6 per cent, and the Greens by 3.4 per cent, Labour got a boost of 10 per cent and the Social Democrats received 23.1 per cent, but the socialist parties saw an increase equivalent to 94 per cent of their first preferences and the broader Left that includes some Independents had a gain equivalent to 71 per cent.

The Left did well out of its perceived affiliation with Sinn Féin. Sinn Féin also knows that it drew significant support from folk happy to support left-wing candidates and who find both Fine Gael and Fianna Fáil toxic.

Now might be the time for Ireland to insist that making people homeless through eviction is immoral, and that people have a right to a home

The exit poll by Ipsos/MRBI for The Irish Times, RTÉ, TG4 and UCD found 31 per cent of its sample wanted radical change, and this was 53 per cent for Sinn Féin first-preference voters.

Nationally, there is an appetite for public investment with 65 per cent thinking that any surplus public funds should be spent rather than passed back as tax cuts.

Now might be the time for Ireland to insist that making people homeless through eviction is immoral, and that people have a right to a home. Now might be the time to recognise that the free market has been given more than enough leeway and that now public investment in social housing is not only necessary but will be welcomed by voters.

The constitution does indeed, in Article 43, insist that no law should “abolish the right of private ownership”, but absent attempts to abolish the institution altogether, the constitution, in the same Article explicitly allows abridging property rights in light of “the principles of social justice” and to meet the “exigencies of the common good”.

Sinn Féin now has the mandate and the allies to build public housing at a heroic rate and, in the spirit of social justice and the common good, to face down the landlords in the Dáil or in the courts in order to do so.

1 Coronavirus: Restrictions set to be extended but partial lifting may be possible next month
2 Growing hope in Government of partial easing of restrictions after May bank holiday
3 Coronavirus: Ireland will have to ‘live alongside the virus’
4 Chief medical officer urges people not to visit hardware stores
5 Coronavirus: Government to extend restrictions for at least two weeks
Real news has value SUBSCRIBE