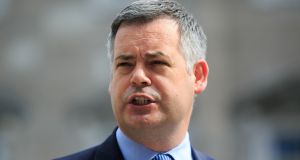 Sinn Féin spokesperson on Finance Pearse Doherty: his press release rehashes the claim that Northern Ireland’s subvention is about half the official figure. Photograph: Gareth Chaney/Collins

Economics should be the interesting and constructive part of discussing a united Ireland, elevating debate above sterile or dangerous arguments about nationalism and identity. That was how the SNP-led Scottish government saw the subject ahead of the 2014 independence referendum. Economic issues were the focus of its engagement with the Scottish people, culminating in its 2013 White Paper on an independent Scotland. There were terrible sins of omission, inaccuracy and spin in the SNP’s case, but many challenges were acknowledged through an economic lens, purposefully chosen to manage public passions and expectations.

It is even more important to attempt this in Ireland, where debate otherwise slips at once into the rights and wrongs of history. So it is truly frustrating that Sinn Féin keeps repeating an economic argument that is trite, petulant, vaguely Anglophobic and transparently absurd.

6 Gordon D’Arcy: David Nucifora does not believe he is accountable to the Irish public

12 Man gets life for 'callous killing' of his wife

15 Kathy Sheridan: What was the purpose of Brian Stanley’s tweet glorifying mass killings?

30 The Music Quiz: Who’s that duetting with Robbie Williams on Somethin’ Stupid?

31 Kia’s spacious Sorento is like a sittingroom on wheels

32 Pfizer/BioNTech vaccine: what you need to know about UK approval

34 ‘It has to stop’: Republican Georgia election official lashes out at Trump

35 Netflix: 10 of the best new shows and films to watch in December

39 ‘The state of the planet is broken’: UN’s stark warning on climate change

40 Covid-19: Central Mental Hospital to test all patients and staff as outbreak confirmed