Stephen Collins: Coming weeks will show if party has shifted strategy on North 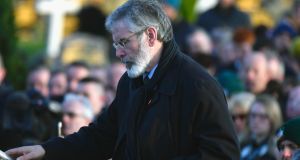 The traditional parties of government in the Republic had better brace themselves, because Sinn Féin is coming after them in earnest, buoyed up by its election success in Northern Ireland and the huge propaganda victory of Martin McGuinness’s funeral.

Sinn Féin’s decision to torpedo the Assembly talks belies all the fine words at the McGuinness funeral about the acceptance of compromise as the only basis for a political settlement in Northern Ireland.

The sudden decision to walk away from the talks raises serious questions about whether the party really wants to resurrect the powersharing institutions established by the Belfast Agreement or whether it is now completely focused on achieving power south of the Border.

The next few weeks will tell if Sinn Féin is simply engaged in another bout of political gamesmanship, aimed at pushing the Irish and British governments and all of the other Northern parties into making concessions, or whether it represents a more fundamental shift in strategy.

The signs are that the primary focus of Sinn Féin at this stage is not the governance of Northern Ireland but the pursuit of its long-term goal of a united Ireland to which the Belfast Agreement was always regarded as a mere stepping stone.

The Brexit vote has raised fundamental questions about the future of the United Kingdom and Gerry Adams has been quick to try and exploit the uncertainty as a means of putting the united Ireland campaign centre stage.

Adams has kept aloof from the political compromises required by power-sharing in the North, preferring instead the luxury of the Opposition benches in the Dáil where he is free to rail against the Government on almost every conceivable issue.

Unlike the Trotskyist TDs, who are unconstrained by any sense of responsibility to the State, Sinn Féin endures occasional embarrassment in the Dáil when Government or Fianna Fáil politicians point to the fact that the party follows policies in the North which fly in the face of the positions it takes in the Republic.

If the government in Westminster is forced to take over the running of the North, Sinn Féin will be in the more comfortable position of being able to blame the British for the shortcomings of life there on the same basis as it denounces the Government in Dublin.

An all-Ireland populist campaigning stance would give the party an open field in which to pursue power in the Republic as a serious advance along the road to a united Ireland.

The downside of this for Sinn Féin would be that the financial largesse provided by the British government to the party in the North, as well as the extensive opportunities for patronage that go with power in Stormont, would undoubtedly come to an end.

It won’t become clear for a few weeks what road the party is taking but the McGuinness funeral has given it a vital propaganda boost at a crucial stage in its united Ireland campaign.

The focus of the funeral coverage was on the later phase of the late deputy first minister’s career when he embraced the politics of compromise and did his best to make Northern Ireland work.

“I fought. I made peace. I made politics,” was how former US president Bill Clinton portrayed McGuinness’s life.

Yet than neat summary glamorised a multitude of sins. For a start it did not spell out what fighting actually meant. The car bombs, the kidnappings, the shooting of “informers” was a savage business.

The campaign in Derry was epitomised in 1990 by the murder of Patsy Gillespie, who was strapped to a bomb and forced to drive his van to an army checkpoint, where the bomb was detonated by remote control, killing him and five soldiers.

The great Irish writer Benedict Kiely anticipated that horrific event in his wonderful 1977 novel Proxopera. That humane book should be required reading for all secondary-school children on the island of Ireland to acquaint them with the brutal reality of the Provisional IRA terror campaign.

The orations at the McGuinness funeral were part of an ongoing project to rewrite the history of the Troubles in a way that justifies the campaign of murder to the present generation and future generations. That narrative is already taking hold and will become pervasive unless it is challenged at every turn.

The real heroes of the Troubles were politicians such as John Hume and Seamus Mallon who never engaged in or supported violence and who delivered the Sunningdale Agreement of 1974, which had all the essential ingredients of the Belfast Agreement.

If Sinn Féin makes it clear in the next few weeks that it is not prepared to engage with the institutions established in 1998 the Government in Dublin will need to take a long, hard look at the strategy it has been following for more than two decades.

That strategy involved giving aid and support to Sinn Féin at every stage in the tortuous negotiations that resulted in the Belfast Agreement and its successors. If the party now effectively abandons the agreement a serious rethink of that approach will be will required.