But Mary Lou McDonald had already deliberately made the first move 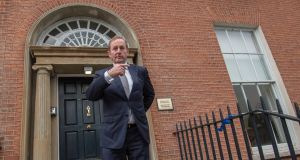 Enda Kenny should not make the mistake of overestimating the patience of a parliamentary party that believes he must go in the medium term. Photograph: Brenda Fitzsimons

The Taoiseach is facing a bit of backlash from Fine Gael TDs this weekend over his comments about a potential coalition with Sinn Féin after the next election. This is a needless tangle for Enda Kenny; and at a time when his Government looks unsure on several issues – not least on public sector pay – he would need to watch himself a bit. He should not make the mistake of overestimating the patience of a parliamentary party that believes he must go in the medium term, but hasn’t a clue how to go about it.

Of course Kenny didn’t really make a bold move towards coalition with Sinn Féin. He merely responded to questions from political correspondents in Government Buildings on Thursday by observing (truthfully) that he had ruled out Fianna Fáil before the last election and ended up doing business with Micheál Martin soon afterwards. At a live podcast later that evening in The Irish Times building, Leo Varadkar expressed opposition to the idea but echoed Kenny’s remarks regarding saying one thing about Fianna Fáil before the election and doing another after the election. For good measure, Varadkar added that Fine Gael had done the same thing with the Independents. Interestingly, I understand Varadkar was not aware of Kenny’s earlier remarks, so this somewhat philosophical approach may be general across the Fine Gael hierarchy, who have learned after six years in government that absolute positions can tend to box you into corners.

Philosophical is the not the word you would use to describe the reaction of backbenchers, who gave vent to the feelings of the party grassroots on the matter in precisely the manner you would expect. I would be surprised if Varadkar does not take steps this weekend to align himself more closely with that position. But if Fine Gael was getting its knickers in a twist about all this, the more significant move was made by Sinn Féin a day earlier.

Coincidentally, in another Irish Times politics podcast on Wednesday, Mary Lou McDonald quite deliberately opened the door on coalition, suggesting a reversal of Sinn Féin’s attitude to the question and particularly to doing business with either of the two big two parties. While being careful to repeat the usual caveats of Sinn Féin not being interested in government for personal advancement etc, McDonald said the party needed to have “a conversation” about the possibility of participating in government in the South in a minority role.

McDonald is not given to whimsy and nor was she speaking out of turn. Gerry Adams confirmed as much the following day in an interview, when he remarked in passing that he “never really subscribed to that notion of a left-wing government, certainly not in the short term”.

Funny, I thought that was precisely what he was arguing for in the last election. “I mean, who are the left, anyway?” he asked. This sounds like a man ready for a new departure.

Sinn Féin is facing up to the fact that its political strategy in the last election campaign didn’t come off. Then the party ruled out coalition with either of the two big parties, betting instead that they would be forced to coalesce, leaving Sinn Féin free to dominate the opposition and subsequently lead a broad left-wing coalition (that was when Gerry knew who the left were) after the following election, perhaps in 2020 or 2021. But the confidence and supply agreement with Fianna Fáil and the minority Government wrong-footed that plan, and Sinn Féin must now figure out two things: one, where its future growth lies; two, what its path to government is.

There has not been, I am told, discussion of this yet in the party. Indeed, there was some consternation among the ranks when they first learned of Mary Lou’s remarks. But activists can see the political logic of the situation, and they know that approaching the election with the same “no coalition” message as the last election shuts off a lot of voters from them. Essentially the party must decide whether it pitches itself at lower-middle-class, Fianna Fáil and Labour-inclined voters, or whether it can more profitably target the seats held by the Independent and radical left TDs.

The choice is a stark one because the two approaches are largely mutually exclusive, and they are offered definition by the question of the approach to coalition.

The instinct of all Irish politicians is often to sit on the fence, but sometimes that’s impossible. Ultimately the choice will define where on the political spectrum the party wishes to place itself – centre-left, or farther towards the radical end of the spectrum. In other words, Sinn Féin will be identified by its attitude towards the essential distributional questions of politics: how to take and from whom? How much to spend and where? Like everyone else is. In other words: how left wing does the party want to be?

This may be what Adams was talking about in his musings about the left. Sinn Féin has seen very significant growth in the last two elections, though it has not swept all before it like some people hoped and others feared. Now the party faces a significant choice. Given how the party leadership privately made the choice of successor to Martin McGuinness last week, it will interesting to see how this debate proceeds.

1 Covid-19: Hairdressers, gyms and religious services could return next week
2 Bloomberg ranks New Zealand top in fight against Covid-19 - but how did Ireland fare?
3 How to gift your child a house deposit . . . tax free
4 Alison Curtis: My guilt at not going for a second pregnancy
5 Q&A: When will we know more about plans to exit Level 5?
Real news has value SUBSCRIBE