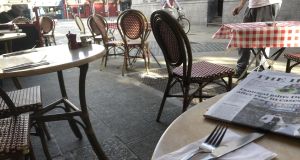 “Handling a broadsheet outdoors can be like wrestling with a small sailboat.” Photograph: Frank McNally

When choosing Dublin cafés these days, with indoors no longer an option, I find myself having to calculate wind conditions as you would for an offshore fishing trip. It’s partly that sitting outside can be cold enough without a gale whipping around your ears. But there’s also my habit of reading print newspapers.  Handling a broadsheet outdoors, often, can be like wrestling with a small sailboat.

Strolling along Dame Street on Friday morning, as a brisk north-westerly blew down from Christchurch, I considered and rejected several possible venues for a coffee break. Then I thought of Chez Max, a place I had somehow never been in before, maybe because it’s a more a restaurant than a café.

But there it was as usual, in the corner of a cul-de-sac beside a gate of Dublin Castle. Not only was it sheltered, it looked – as always – like a piece of transplanted Paris, complete with red-chequered tablecloths. Even the waiter was French. when I sat down and ordered, he assured me my choice was “parfait”.

It might almost have been in Montmartre, except that Paris is much less wind-afflicted than Dublin. Even here was not safe. As I found out, the north-westerly had split its forces, sending one half down Lord Edward Street and the other through the castle, before they both surprised me with a pincer movement.

I ended up using the ashtray to weigh down the notepaper I was trying to write on, while anchoring my recently collected post with a book. Reading The Irish Times, meanwhile, was like trying to cycle a Dublin rental bike uphill – it required both hands. You let go with even one at your peril.

Among the statues in the castle, I recalled, is Lady Justice, the Roman symbol of law. She carries the usual sword and scales, but her lack of blindfold and other oddities made her a figure of fun during the years of British rule. Especially controversial was the fact that she faces inwards from the gate, not out. Hence a scornful verse: “The statue of justice/Mark well her station/Face to the Castle/Arse to the nation.”

Also only a short distance from my Parisian café was Berlin – the bar of that name, which has earned notoriety during the pandemic. As reported yesterday, it now faces a Garda challenge to renewal of its licence. The bar’s front is on Dame Street, its rear on Dame Lane. The prevalence of that prefix locally also includes a side-street whose name could be an alternative title for Lady Justice. I mean of course Dame Court, which Berlin will be also be facing shortly.

Among the quirkier stories in my wind-blown newspapers yesterday was one about the discovery of a “man-cave” under New York’s Grand Central Station. Hidden behind plasterboard in a disused locksmith shop, it included a futon, TV, and fridge, and had seemingly been used by male railway employs as a place to drink and nap on the job.

The case echoes a classic Myles na gCopaleen story about a Dublin railway worker who locks himself inside the dining car of a train overnight and helps himself to the drink. At some point, the carriage gets shunted into a tunnel so that the night lasts several days, leaving him simultaneously hungover and resentful. Na gCopaleen somehow saw this as a metaphor for the condition of the artist in post-colonial Ireland. No doubt the New York lawyers are working on an equally creative defence.

One must never be caught “mansplaining” now, I know. But it seems that silence can be damning too. The latest book I’m reading is by Olga Tokarczuk, 2019 Nobel laureate, in which the female narrator, frustrated by a tight-lipped male neighbour, advances this theory: “With age, many men come down with testosterone autism, the symptoms of which are a gradual decline in social intelligence and capacity for interpersonal communication […]. The person beset by this ailment becomes taciturn and appears to be lost in contemplation. He develops an interest in various tools and machinery and he’s drawn to the second world War and the biographies of famous people […]His capacity to read novels almost entirely vanishes.”

Worryingly, I recognise some of these symptoms in myself.

But on the plus side, I have read more novels than ever this summer, including hers. It’s partly the extra time most of us have now. It’s also that, as reading material goes, novels have the right mixture of weight and portability. You can carry them around in a coat pocket and, crucially, when seated at an outdoor café, you can also safely let go of them occasionally.