Seamus Coffey: Choices have to be made on budget day 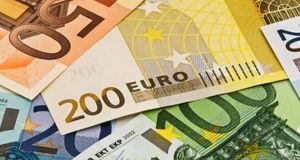 The recent surge in corporation tax from foreign companies corresponds to €1,500 for every household in the country. Photograph: Getty Images

Next year should see Ireland have a balanced government budget for the first time in a decade. The huge deficit between government income and spending that opened in 2008 has been successively and successfully reduced but some risks remain, not least of which is the €200 billion debt that running such deficits contributed to.

The latest estimate from the Department of Finance for the scope available for tax and spending changes in 2018 is €1.7 billion. Spending can rise by more than this if offsetting revenue raising measures are introduced.

6 ‘Do I have to do everything around here?’ Irish women and the ‘invisible job’

8 Coronavirus: 437 cases and no further deaths reported in State

9 Oprah with Meghan and Harry: One by one the bombshells drop

11 Steady rise in number travelling further than 10km from home

12 Roy Greenslade and the IRA: I was his editor. His admission raises hard questions

33 Spring clean: 13 ways to spruce up your home – with or without a tradesperson

36 Murmuration of starlings: How our stunning front-page photograph was taken

38 Girl left scarred after falling into brambles at school secures settlement of €90,000