Seán Farren: Unionist rebellion holds the key to the Rising 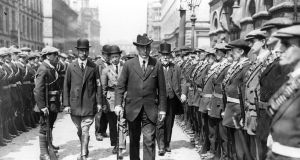 If the decade of commemorations is to achieve its goal of promoting a greater appreciation of the events that marked the years 1912-1922 and of the lessons they hold for today’s Ireland, it is imperative that those events be viewed in the fullness of that context.

This is particularly essential when considering the 1916 rebellion. A proper consideration of that momentous event should set it alongside the earlier, unionist rebellion of 1912-14, and the context it created for what followed.

Unlike its 1916 counterpart, that first of the decade’s rebellions was successful with hardly a shot being fired.

Nonetheless, rebellion it effectively was. It involved the armed mobilisation of thousands in a volunteer force pledged to oppose Home Rule, at least for northern counties.

Aided by political and military leaders of the British establishment, and well equipped by arms purchased in Germany, it achieved its objective and the 1914 Home Rule Act did not extend to the North.

In many respects that rebellion was the model for those who organised the second.

While the prime movers of the latter, the Irish Republican Brotherhood (IRB), had long hoped to mount a rebellion, it was the coincidence of the unionist rebellion and the outbreak of the Great War that provided that opportunity.

In his article The North Began, MacNeill argued for a force that would ensure Ireland’s “national self-government”.

Pearse rejoiced that the “Orangemen have armed, because it is a goodly thing to see arms in Irish hands”, and urged nationalists to do likewise.

With mutually exclusive aims, two armed militias now faced each other. The threat of civil war loomed as the Home Rule bill reached its final stages in the summer of 1914 with no agreement as to its jurisdiction.

It was only the outbreak of the Great War, the reluctant acceptance by the Irish Parliamentary Party of what they thought would be a temporary exclusion of northern counties from Home Rule, and the actual postponement of the implementation of the Home Rule Act, that removed that threat.

However, just as with the northern rebellion which took no account of implications for unionist-nationalist relationships within the North, in planning the rising little consideration seems to have been given to its likely effects on relationships with unionists, particularly with those in the North pledged to violently oppose self-government for Ireland.

The reference in the 1916 Proclamation to “cherishing all of the children of the nation equally” is interpreted as a pledge to treat people of all traditions equally.

But behind those words, there is no indication as to what might be involved in so cherishing all of the nation’s children.

Furthermore, for all the idealism for an independent, free republic there is no indication as to how the country would be governed.

While the Proclamation also contains a commitment to the establishment of “a permanent National Government representative of the whole people of Ireland and elected by the suffrages of all her men and women”, the question remained how such a government would have been created in the face of unionist opposition.

The meeting of the First Dáil in January 1919 would show just how unlikely that was, given the absence of unionist representatives.

The reality was that the 1916 Rising took place against the background of an Ireland already on the threshold of actual partition, with no likelihood of any Irish or British attempt to prevent it becoming a constitutional reality being successful.

Given unionist reaction to the rebellion, the slide towards a bitter division of the country was only strengthened.

The best offer towards overcoming some of the worst effects of partition was the proposal for a Council of Ireland contained in the Anglo-Irish Treaty of 1921.

Although the unionist government nominated representatives to the council, the new Free State government did not.

Instead, it hoped that the Treaty’s other proposal of a Boundary Commission would undo, or at least severely limit the extent of partition.

As a result, the council proposal lay a dead letter not to be revived until it became a central requirement of the Sunningdale Agreement 50 years later, and later still of the Good Friday Agreement.

As for the Boundary Commission’s report, it became a complete dead letter and the boundary between the six and the 26 counties remained untouched, leaving northern nationalists the big losers in what politically emerged from this turbulent decade.

Whatever else resulted from the decade in terms of greater independence for the southern state, and of security for unionists in their northern enclave, on an all-Ireland basis the outcome was two estranged and blood-stained states.

Lost were opportunities to develop positive relations as might well have happened under a Council of Ireland.

Also lost with the council’s rejection were opportunities to contain the forces that propelled both states into politically exclusive cultural and confessional ghettos.

These legacies persisted for several more decades until the North’s civil rights movement and the SDLP forced a rethink in our relationships from the 1960s.

Since then and particularly since the Good Friday Agreement, we have begun to undo their negative effects by working together to build an Ireland, North and South, that does genuinely cherish everyone who resides here equally.

This is happening through the North-South Ministerial Council, the North’s partnership government, and in a myriad of community-based projects.

It is to be hoped that these initiatives will be properly recognised in the context of this year’s commemorative events.

1 Covid-19: State moves to Level 5 for six weeks with hopes of ‘meaningful’ Christmas celebrations
2 Life under Level 5: What will the next six weeks look like for Ireland?
3 Bill that overrides UK’s Brexit deal denounced in House of Lords
4 Trump says public sick of coronavirus ‘idiots’ like Fauci
5 ‘I was living in a boat in remote New Zealand mostly unaware of the Covid-19 crisis’
Real news has value SUBSCRIBE