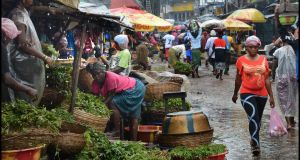 Mabella Market in Freetown, Sierra Leone: Many Sierra Leoneans put themselves at great risk – and often paid with their lives – to treat the sick, clean hospital wards, bury the dead and mobilise a public response. Photograph: Brenda Fitzsimons

In early 2015, as the Ebola epidemic that had killed almost 4,000 people in Sierra Leone was finally coming under control, Sinead Walsh, then Irish ambassador to the west African country, travelled to the northern village of Rolath, where almost half the village had been wiped out by the virus. There, she met Isatu Kamara, a shy 14 year old. Sixteen members of the Kamara family had succumbed to Ebola, leaving Isatu and her grandmother alone with their grief in a cluster of deserted homes.

Isatu was one of the lucky ones. She had been infected with Ebola but received good treatment and, like about 4,000 others in Sierra Leone, managed to survive. She had tried going back to school, but had struggled and now sat in the quiet village with her grandmother, who made soap to try to support them. As Walsh recounts in a new book on the west African Ebola outbreak, the visit to Rolath left her with a sense of overwhelming helplessness. “For a while they would be the focus of attention and promises would be made about supporting them,” she writes of the survivors. “But, as in other disasters, these promises would rarely be kept.”

Walsh, who was then in her mid-30s, had been in Sierra Leone for a number of years when Ebola first began to spread in early 2014. As the disease cut its devastating path through the country that year, she and her colleagues at the Irish mission in Freetown found themselves on the front line of the emergency, helping to co-ordinate the response, disbursing funds, cajoling local officials and sharing information across a complex, chaotic landscape.

Getting to Zero, the book Walsh has co-written with Oliver Johnson, a British doctor who ran an Ebola isolation unit in Freetown during the emergency, is a remarkable account of that terrible year. Drawing on the authors’ own experiences, and on 85 interviews Walsh carried out with other key players, it is also an attempt to draw lessons from the disaster. Hundreds of reports have been written on the 2014 epidemic – the most widespread Ebola outbreak since the virus was discovered – but none is nearly as insightful, compassionate or unsparing as this. It’s the most important book I’ve read by a serving Irish civil servant. And, published just as Ebola cases are being reported in the Democratic Republic of Congo, its lessons could hardly be more timely.

As in Liberia and Guinea, which were also ravaged by the 2014 outbreak, Sierra Leone owes a great deal to the many courageous people who helped arrest the spread of the disease and care for its victims. Getting to Zero is filled with stories of Sierra Leoneans who put themselves at great risk – and often paid with their lives – to treat the sick, clean hospital wards, bury the dead and mobilise a public response. The same goes for the aid workers, medics, soldiers and officials who improvised in appalling circumstances. For all that, however, the story is a sobering indictment of local and international failures. The bottom line is that 4,000 people were killed in Sierra Leone – and 11,300 across the region – and thousands of them would not have died had the response been properly managed.

Sierra Leone, the world’s eighth-poorest country in 2014, was woefully unprepared. Rampant corruption, patchy infrastructure, a public suspicion of government and a landscape divided into 149 chiefdoms all hindered the response. But Walsh and Johnson argue that, even while allowing for those circumstances, too many failures were allowed to occur.

Rampant corruption, patchy infrastructure, a public suspicion of government and a landscape divided into 149 chiefdoms all hindered the response

The government in Freetown was slow to admit the scale or severity of the epidemic, Walsh writes, with the health ministry operating “on a different planet” early on. When it did get its act together, one of the main parts of its strategy – quarantine – turned out to be a mistake because it could be circumvented (through bribes for the security services) and it gave people an incentive to flee and hide, making contamination rates worse.

Walsh writes that she was “baffled” by the shortage of aid organisations willing to operate treatment facilities. Too many humanitarian outfits were fixated on the risks of action without showing enough concern for the risks of inaction. Others were blind to the local context and deaf to politics, making it difficult for them to act effectively. One major aid agency reopened a closed clinic in a slum area of Freetown for just one day to facilitate the visit of a camera crew.

Foreign donors jealously protected their patches and were too inflexible in how they allocated money. The outside world only showed an interest when hysterical media coverage worried western publics. When the United Nations responded, it created a new agency, United Nations Ebola Emergency Response (Unmeer), to deal with the crisis. The authors believe this was a mistake. Unmeer never found its footing and remained peripheral to the overall effort. Perhaps the most scathing criticism is reserved for the World Health Organisation (WHO), which is portrayed as lacking the right people, overly bureaucratic and so concerned with maintaining its relationship with the Sierra Leonean government that it failed to sound the alarm in time. When it all ended, management consultants descended on Freetown to plot recovery plans that Johnson dismisses as “patronising and superficial”. Both he and Walsh believe the root causes of the crisis remain unaddressed.

The authors don’t spare themselves. They were naive, they write, to put such faith in early reassurances from the WHO and the government, and believe they should have taken more control in their respective areas when it was clear the response was too slow. They continue to agonise over decisions they made and moral dilemmas they faced, and ultimately conclude that “we” – those leading the response – provided substandard care, failed to engage sufficiently with communities and didn’t show enough respect for individuals’ rights. Yet the authors’ professionalism and compassion shines through on every page.

As she drove away from the village of Rolath that day in early 2015, Walsh writes, she was racked with guilt. She was exhausted and disoriented after months on an emergency footing, but she and people like her would have the luxury of moving on to work on other things. Ebola would be just a memory, a story to tell friends and family back home. “But for many thousands of Sierra Leoneans like Isatu,” she writes, “Ebola would never be over.”